Word of the Week

Word of the Week: Character Character, I believe, is one of the most important traits a person can have. Character is “the group of qualities that make a person, group, or thing different from others”. Having good character raises your standards, creates good morals, and makes you an overall better person.

I have learned what it means to have good character through out my time playing softball. I am constantly trying to be the best version of myself in how I play the game and how I carry myself during the game. Not only do your coaches and college coaches like to see a player with good character, it is necessary as a teammate to have this quality. Being loyal, having integrity, being responsible, and having empathy are all traits of a player with good character. When you maintain your character on the same level whether you win, lose, tie, strike out, or hit a homerun everyone around you recognizes it. Your teammates and others watching truly respect these types of athletes.

The first person that comes to mind when I think of someone who emulates the word character is a former teammate of mine. This teammate has gone on to play collegiate softball and is one of the humblest girls I have ever had the chance to play with. She has the kind of character everyone should want to emulate. I had so much respect for this teammate as she held herself to the same standards as she did everyone else and was constantly a positive energy on and off the field. She had all of the character traits I previously listed. In the context of our country having good character creates better citizens. These citizens then go out into the world and help create a better place for others. Character is fundamental quality of a good leader. Character traits such as empathy and loyalty allow you to build relationships with your subordinates, these relationships then lead to trust and loyalty.

My character is something I value and am constantly working on. I believe holding yourself accountable and creating good morals for yourself makes you a better person. Attending Georgia Military College Preparatory School has helped me tremendously in building my character. At school, I am held to high standards that lead me to being a better person and a better leader so that I am able to go out into the world and benefit our society.

Show your support by making a donation today. Donate Now 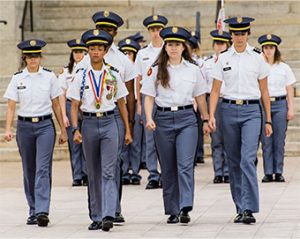 Click here for news and updates on GMC Prep School.