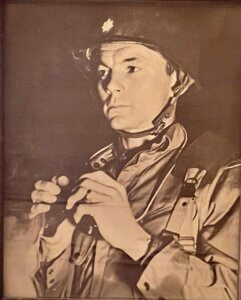 Lt. Colonel William L. Turner, known as “Billy” to his friends, was born June 18, 1916, in Sparta, Georgia. The son of Dr. and Mrs. Dennis T. Turner, Billy moved at an early age to Milledgeville, Ga., where he grew up and attended Georgia Military College (Class of 1934) before entering the Military Academy. Billy, who was a member of F Co. at the Military Academy, was always remembered by his classmates as a Georgia boy who never lost his drawl through his years at the Point and in the Army afterwards. After his graduation, Billy reported to Van De Graf Field, Alabama, for flight training. After a short while at this, he was assigned to the Cavalry and reported to the Fifth Cavalry at Ft. Bliss and later at Ft. Clark, Texas. Following this duty, he was with the 10th Cavalry at Ft. Riley, Kansas.

In December of 1941, Billy transferred to the Armored Force and was sent to Pine Camp, New York, for duty with the Fourth Armored Division, where he remained until April, at which time he was transferred to Ft. Knox, Ky., and the Eighth Armored Division. In July of 1942, Billy transferred to the paratroops, and was sent to Camp Toccoa, Ga., where he was one of the first officers to report to the newly formed 506th Parachute Infantry Regiment, with which regiment he remained until his death.

While with the 506th PIR, Billy was stationed at Ft. Benning, Camp Mackall, N.C., and Fort Bragg. At Toccoa, Billy reported as a Captain and was assigned to the Regimental S3 Section. He approached his job with enthusiasm, but with the reservation that he wanted command duty, whatever it was. He was soon given the First Battalion, which he trained from then until D-Day. He qualified as a parachutist at Toccoa on a most difficult and improvised jump field. The 506th left for England in August of 1943, where it remained until the D-Day invasion.

LTC Turner jumped into France in the early morning hours on D-Day, June 6, 1944, the invasion of Germany’s fortress Europe. On D-Day plus one, his battalion was ordered to attack an enemy stronghold at Vierville. Near St. Come du Mont, they encountered heavy enemy resistance and LTC Turner jumped into a Sherman tank to personally direct the fire. Each time LTC Turner got in or out of the tank he exposed himself to enemy fire and tragically was killed during the battle. Thanks to his heroic leadership, the battalion was able to move forward by destroying the German position.

LTC William L. Turner with the 506th Parachute Infantry Regiment of the 101st Airborne Division was posthumously awarded the Distinguished Service Cross for “outstanding leadership, personal bravery and zealous devotion to duty at the cost of his life.” At the Normandy American Cemetery and Memorial, there are over 170 acres of white crosses and Stars of David which mark the graves of American soldiers who gave their lives to liberate Europe during World War II. The cross at plot D, row 19, grave 21 bears the name LTC William L. Turner. His brother, Lt. Dennis T. Turner of the 28th Infantry Regiment, who was killed in France on July 12, 1944 is buried beside him.

Other decorations he received include the Bronze Star Medal and the Purple Heart Medal. LTC Turner’s Regimental Commander shared this after his passing: “From the day of his reporting to duty at Toccoa until his untimely death on 7 June, Bill Turner fulfilled his role as soldier. He trained his battalion with a singleness of purpose, preparation for combat, with devotion and conscientiousness. His stature was small, his heart was big, his head was clear, his mind was sharp and his courage unlimited. His battalion reflected his fighting spirit and tenacity of purpose.”

Besides his parents, Billy was survived by his wife, the former Miss Marjorie Jackson of Little Rock, Ark., whom he married in December of 1941; a brother, Rozier Turner, a former lieutenant of the Engineer Amphibious Corps; and a sister, Frances Turner Thornton.The Turner family has a strong family legacy at GMC, including Jack Thornton, Sr. (JC’38) (married to Frances Turner), Dennis T. Turner (HS’39), Rozier Turner (HS’40), Jack Thornton, Jr. (HS’61), and Martha Turner Wright (HS’71).