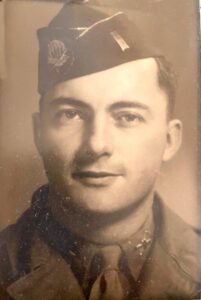 Dr. James Baugh came from humble beginnings and always felt fortunate to attend Georgia Military College. He graduated from GMC High School in 1937 and GMC Junior College in 1939. Dr. Baugh went on to attend the University of Georgia and the Medical College of Georgia. As he was preparing to attend medical school, Dr. Baugh was called to military service. Dr. Baugh served in World War II as a charter member of the 325th Glider Infantry Regiment of the 82nd Airborne Division, which was given the task to arrive into battle by glider. Glider troops provided essential support to the parachute regiments and fought on the frontlines alongside their paratroopers. This storied unit led the way in key strategic engagements during World War II. Dr. Baugh’s unit conducted a glider assault on D-Day plus one landing by glider in Normandy and participated in the invasion of France. The next glider assault for the 325th was during Operation Market Garden, the largest airborne operation ever conducted. During this battle, the 325th landed among German positions that had surrounded other elements of the 82nd Airborne Division. This glider attack helped turn the tide of battle.

Dr. Baugh’s service included the following campaigns: Sicily, Naples-Foggia, Normandy (with arrowhead), Rhineland (with arrowhead), Ardennes, and Central Europe. One of his proudest moments was his combat experience during a glider assault when one of his glider pilots was shot and killed. Dr. Baugh was tasked with safely landing the glider on the ground and ensuring the safety of his fellow glidermen. During World War II, Dr. Baugh was joined in heroic military service by four siblings, three brothers, and one sister, who all survived the war.

In 1997, LTG (then MG) Joseph Kellogg, Jr. recognized Dr. Baugh for his selfless service to the U.S. Army 82nd Airborne Division and for earning the Bronze Star Medal. He was also a recipient of the European-African-Middle Eastern Theater Service Medal representing the multiple campaigns he participated in during WWII. His regiment also earned the Presidential Unit Citation due to their heroic efforts during Salerno and Operation Market Garden.

Dr. Baugh was part of the official delegation which traveled overseas to Russia to participate in the trial and negotiate the release of U-2 spy plane pilot Capt. Frances Gary Powers who was shot down over Russia while conducting a surveillance mission. Dr. Baugh’s humanitarian efforts greatly assisted in the release of Capt. Powers back to the United States.

After he was discharged from the Army, Dr. Baugh began classes at the Medical College of Georgia. After completing medical school and receiving his M.D., he served in the Medical Corps at Fort Lewis in Tacoma, Washington for one year. Dr. Baugh then completed residency at the Milledgeville State Hospital. His specialty was Family Practice and Industrial Medicine. Dr. Baugh led a notable medical career, practicing medicine in Baldwin County for 52 years and served as Medical Examiner for many years as well.

Dr. Baugh was deeply invested in the Milledgeville community until his passing in 2010. He served on the Board of Trustees at Georgia Military College for 28 years and served as Mayor of Milledgeville for 18 years. In addition, he was on the Century Bank Board and served as President of Sons of the American Revolution. He led the local Democratic Executive Committee as Chairman for 35 years and was a Mason as well. Dr. Baugh was inducted as an honorary member of Kappa Alpha Fraternity at Georgia College and State University. Dr. Baugh was also an active member of the First United Methodist Church in Milledgeville.

Dr. Baugh credited GMC as the greatest influence on his life and the reason for his success. GMC is a Baugh family tradition with over 28 relatives who have attended GMC. Dr. Baugh was committed to giving back to GMC to help the next generation. The James E. Baugh Barracks reflect Dr. Baugh and his wife Beegee’s commitment to enhancing the lives of GMC cadets well into the future. The Baugh Family also established a charitable trust that will benefit GMC beyond their lifetimes.

Dr. Baugh and his wife Beegee shared 60 years in marriage. Together they have one daughter, Patricia Baugh Thompson, and five grandchildren.