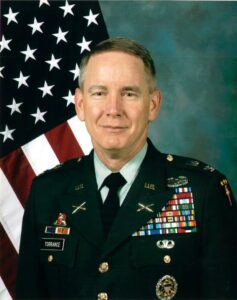 COL Tom Torrance, USA (Ret) moved with his family as a child back to his father’s hometown of Milledgeville, Georgia and began his journey at Georgia Military College as an 8th grader. He graduated from GMC High School in 1974, joining his father, uncle, sister, and two brothers as graduates of GMC, adding to the estimated 30-plus family members who have graduated from GMC. After graduating from GMC, COL Torrance went on to attend Georgia College and State University. While attending Georgia College in 1976, he decided to join the Army ROTC program and cross-enrolled at GMC to attend ROTC classes and training. On December 15, 1978, COL Torrance commissioned as a second lieutenant in the Field Artillery through the Army Reserve Officers Training Corps Program on the GMC campus.

COL Torrance earned a Bachelor of Business Administration Degree from Georgia College and later a Master of Science in Administration as well. He also earned a Master of Science in Strategic Studies from the U. S. Army War College. Additionally, he is a graduate of the Canadian Forces Command and Staff College, and the British High Command and Staff Course.

During his 30 years of active duty, COL Torrance served in a variety of command and staff positions in the U.S. and abroad. Most notably he held command positions at the Battalion and Brigade levels. After a four-year stint in Germany, COL Torrance returned to GMC as an officer in the U.S. Army to serve as an assistant professor, teaching Military Science to the Junior College Corps of Cadets from 1984 to 1988.

COL Torrance’s combat assignments include Operation Desert Storm and Operation Iraqi Freedom. In Spring 2003 during Operation Iraqi Freedom, COL Torrance earned the Silver Star for exceptionally meritorious achievement and valorous service in connection with military operations against a hostile force. He distinguished himself while commanding the 3rd Infantry Division (Mechanized) Artillery (DIVARTY) and serving as the Division’s Fire Support Coordinator. COL Torrance was directly responsible for planning, coordinating, and executing all fire support as the 3rd Infantry Division attacked farther and faster than any other in history. His leadership and expertise helped destroy the enemy’s fire support systems and saved American lives. Through 21 days of continuous combat, he personally led the DIVARTY Headquarters’ convoys to the occupation of the Baghdad International Airport. Throughout Operation Iraqi Freedom, COL Torrance exhibited great personal courage, leadership, and innovation, in keeping with the highest traditions of military service.

COL Torrance continued to serve in the U.S. Army, and led a prolific military career. He served in the Pentagon from 2004-2006 on the Joint Staff in the Directorate for Strategic Plans and Policy for the Middle East. His final assignment on active duty was as the Deputy Commandant at the United States Army War College in Carlisle, Pennsylvania. He served in that role from 2006 to 2009. COL Torrance’s many military awards and decorations include the Distinguished Service Medal, Silver Star, Legion of Merit, and Bronze Star.

After retiring from the Army in 2009, COL Torrance worked for the Northrop Grumman Corporation in Huntsville, Alabama until 2016. He served as the Operations Manager for the Counter Rocket, Artillery, and Mortars Program which supported Army operations in Iraq and Afghanistan.

When COL Torrance and his wife, Ellen, returned to Milledgeville in 2016, he was eager to find ways to get involved in the community. COL Torrance joined the GMC Alumni Association Board and served as president from 2017-2021. Furthermore, COL Torrance gives back to the school financially through the Torrance Family Scholarship, which provides financial assistance to Prep School and Junior College students.

COL Torrance serves as a member of the Georgia Military College Foundation in addition to several other civic leadership boards. In his spare time, he helps operate a cattle operation at the Torrance Family Farm. COL Torrance is married to the former Ellen Provost of Monroe, Georgia. They have two adult children, Leighann Triplett and Kelly Capozzi. He is the proud Papa to five grandchildren.