For the Smith family, GMC is a family affair. Throughout the years, GMC has been home to three brothers – David Smith (Prep ’02, JC 2008), Ryyan Smith (Prep 2007), and Laughlin Smith (Prep 2015). The Smith family has experienced many changes over time, like three years living overseas in Japan, to both David and Ryyan’s military deployments. Despite the immense changes the Smiths have faced, GMC Prep and GMC Junior College served as special anchors the family has kept coming back to. 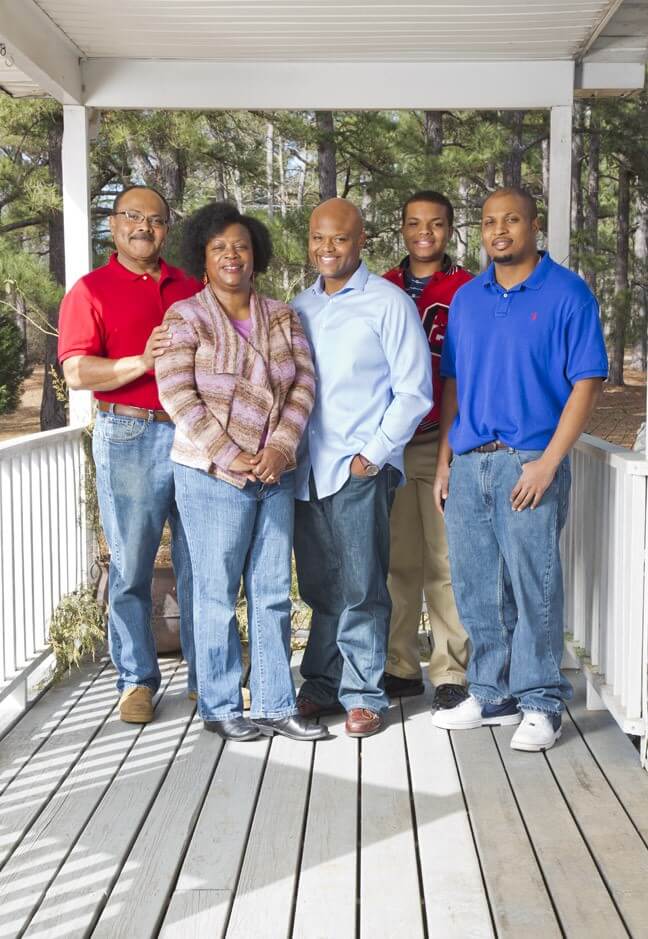 Janet and her husband Mark, both military Veterans themselves, knew they wanted each of their boys to experience the structure and rigor of a military education. They were confident GMC would push their three sons along and would encourage them to do their very best. The family lived on a third-generation family farm in Sparta, so their days attending GMC were marked by early morning wakeup calls and long commutes to get to school on time.

David, Ryyan, and Laughlin each played on the football team, and Laughlin played in the marching band as well. Morning Formation served as a powerful sentiment for the Smith family. “Formation in the morning was just so beautiful – what a way to start the day. I believe any child can succeed by starting their day off right. We still incorporate part of the Cadet prayer into our family prayer. It has been that impactful for us,” shared Janet. The Smith family’s commitment to excellence, their support of each other, and the GMC experience has certainly shaped David, Ryyan, and Laughlin.

David, the oldest of the Smith brothers, enlisted in the Army after graduating from GMC Prep and deployed twice to Iraq. “At GMC I learned that duty, honor, country, and respect were not just words, but would influence the choices I’d make in my life. I used these principles to serve in the Army and fight a war in Iraq. Demonstrating these principles have made it easier to build strong relationships socially and professionally with family, friends and colleagues,” said David. Upon returning from his deployments, David used his GI Bill to attend GMC Junior College, where he earned his associate degree. He then attended Georgia College and State University, where he earned his bachelor’s and master’s in accounting. David works at Price Waterhouse Cooper in New York City, preparing taxes for private equity and hedge funds. He has set his sights on being an entrepreneur in the future, just like his grandfather.

Ryyan attended GMC Prep for 6th, 7th, and 8th grade, and then moved with his family to Japan where his parents worked for three years as Department of Defense school teachers. Ryyan returned to GMC to complete his senior year at GMC Prep. “A big component to success in life is being able to struggle through adversity and being patient when working towards a goal. Between the parades, formations, and bullring, GMC really helped instill that in me,” noted Ryyan. Like his older brother, Ryyan also enlisted in the Army out of high school and deployed to Iraq. Upon his return, Ryyan attended GMC Junior College for one year, and then transferred to Georgia College and State University, where he attended Georgia Tech through dual enrollment. He then transferred to Georgia Tech and graduated with honors with a bachelor’s degree in software engineering. Ryyan has been leading a successful career at Square for the past two years. Both he and his wife Avery (Auburn ’12) are building a small business. They hope to invest their time in the future to help young African Americans navigate student loans and build businesses.

Laughlin, the youngest of the Smith brothers, attended GMC Prep 6th through 12th grade and graduated in 2015. He attended Kennesaw State for one year and then transferred to the    University of Georgia, earning a degree in finance at the Terry School of Business. Laughlin graduated from UGA in 2020 and now works at Prime Revenue in Atlanta. “GMC showed me how to have grit. The JROTC instructors and teachers (shout-out to Dr. Brown, MAJ McElheny, MAJ Gebel and MAJ Harbor) knew I wanted to be successful and gave me the tools and lessons to do so. When I did the cutover from high school to college, it took me almost five years to complete my degree because I didn’t start getting internships until the beginning of my senior year. To prove that I was ready for my professional career I completed four internships. The company I work for today actually rejected me for an internship the first time I applied, but through perseverance, it resulted in me taking on two internships and a full-time role. Now in my life as a professional, I use the lessons I learned from GMC to provide the best solutions and experience to our clients and partners,” he shared. Laughlin is an associate on the Funding TEAM at Prime Revenue. He has a goal to start a financial technology company of his own, promoting financial wellness in lower household income areas.

These three GMC alums and brothers are all unique individuals of their own, but it is clear that the GMC values and ideals of “duty, honor, country” and “character above all” have served them well as they lead their lives as successful professionals wishing to make an impact on the world.

To learn more about the Smith family, please visit Janet’s website at https://janetpaigesmith.com/.