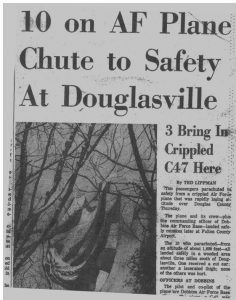 In the summer of 1960, William Samuel (Sam) Fowler, Daniel Mercer Grimes, and William John Rogers, all members of the GMC high school class of 1953, found themselves in a scary and rather unlikely situation while flying on an Air Force plane to California. The three young men were all members of the National Guard in Milledgeville and decided to make a trip to California to visit some girls they had met. They were invited to hitch a ride on an Air Force plane going that way, so they eagerly agreed to join a General and some other soldiers on the flight west.

When Sam called his sister, Carolyn Fowler Smith, to tell her of his plans, he cautioned her not to tell their mother, as she would be worried and he did not want their mother to know.  He said to Carolyn that he wanted her to know where he was just in case. So, Carolyn wished him luck and told him to be careful, and that she would not reveal his plans to their mother.

The C47 plane had just flown out of Atlanta about 30 minutes when the pilot, Captain John England, told the crew that the plane was losing altitude and that all loose objects had to be thrown out. He said that the plane had developed a runaway propeller shortly after takeoff in Atlanta, and it was losing speed and altitude. Of course all the boys had new luggage and fine new clothes for their time in California, but everything had to go. The next message from the pilot was that the plane was continuing to lose altitude.  He informed the scared crew that they must put on parachutes and jump out of the plane.

Even though the majority had never parachuted out of plane before, the young men donned their parachutes, jumped out of the plane, and miraculously, they all landed safely after jumping from about 1,000 feet. This flight was Danny Grimes’ first time flying in an airplane and the first parachute jump for eight of the ten men who had to parachute out. The plane’s pilot and co-pilot, as well as the commanding officer of Dobbins Air Force Base, who was also on the plane, were able to stay in the plane and safely land it after the mass parachute jump by the passengers. 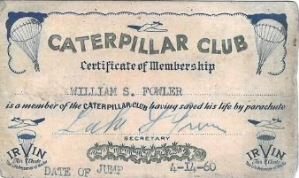 A few weeks later, each of the three boys received a letter and a small pin.  The letter stated that each of them had received the honor of being in the “Caterpillar Club.” Included in the letter was a small, gold lapel pin in the shape of a caterpillar with a ruby eye.  This pin is only given to people who have been ordered to jump from a plane in order to save their life.

Sam Fowler proudly wore this pin each time he flew in a plane for the rest of his life.  He said that it was very seldom that anyone recognized what the pin stood for, but it had meaning to him nonetheless.  His grandson, Nick Scheil, now wears the pin when he flies every week for his job.

After all the trouble Sam took to keep his trip from his mother, he was unsuccessful due to the publicity the flight received. She called two days later after reading about Sam’s parachute jump in the paper. These three young GMC graduates had quite the adventure that summer day so many years ago, but it is one their families and friends will certainly never forget for many years to come.