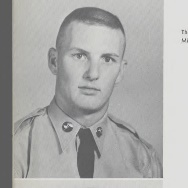 Reverend Dr. Thomas Peavy described himself as a local cadet “town boy” who had a part-time job bagging groceries at a local food store in downtown Milledgeville. When he wasn’t in school or working, he dated a local girl, and explored the woods and streams of Baldwin County while hunting and fishing. He was a drummer in the GMC Band Company and described how being a cadet in a battalion affected his career in the US Navy. He said, “The Cadet curfew was strictly enforced, so being a local cadet, I had my challenges in making it home before curfew.  When I joined the US Navy, the training payed dividend. I understood common military courtesy, inspection and preparation. I was to be the Recruit Chief Petty Officer of my boot camp company but a trip to sick bay and a week in the dispensary placed me in a company that had already formed. When I went to the company I was made Recruit Petty Officer Second Class, 6th Squad Leader and Company Gunner’s mate. I had an interview with an officer during boot camp and was given orders to display my ability to handle a rifle (a piece in the Navy). At the conclusion of boot camp, I was given orders to the US Navy Ceremonial Guard in Washington, D.C. This is the ceremonial unit for the Navy and performs burial details in Arlington Cemetery and various ceremonies and details in Washington D.C. I was a member of the Ceremonial Guard for President Johnson’s inauguration, and in the funeral details for President Hoover and General Douglas MacArthur, in addition to the usual ceremonies in Washington.  After my Guard tour, I was ordered to the USS Bainbridge, DLG(N) 25, the first Nuclear Powered Destroyer in the Navy. I was a Gunner’s mate and was in the First Nuclear Task Group in Combat in Vietnam on December 2, 1965. Both these assignments were select assignments and I believe GMC helped me in those selections.” 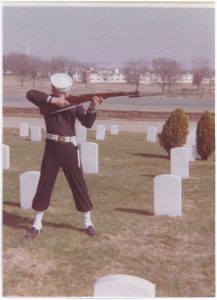 After dropping out of high school to join the Navy, the highlight of his time at GMC was graduating from GMC junior college. He knew this was the beginning of his love of learning and created in him a desire to pursue education. He stated, “I knew this was the beginning of an academic and professional career that has endured from 1967 until now.  I am a life-long learner thanks to GMC.” When asked what he thinks his former teachers would remember about him, he shared with me that he believed they would be surprised that he has continued academic pursuits, delving into and been credentialed in a number of academic disciplines and professional practices.  He specified, “I was a solid student at GMC but not necessarily gifted or studious since I worked full time and was married. I currently hold an Associate Degree in General Studies from GMC, a Bachelor of Science in Sociology from Georgia College, a Master of Education in Adult & Higher Education from Georgia Southern College, an Education Specialist Degree in Adult Education from the University of Georgia, a Master of Science in Counseling and Human Development from Troy University, the Doctor of Education in Community and Agency Counseling from Mississippi State University, a Post-Doctoral Certification in Traumatology from Florida State University, and additional teacher certification work from Columbus State University. I completed the Georgia EMT certification long course at Columbus Technical College, and I am currently a student at Birmingham Theological Seminary in Birmingham, AL. In addition, I am a certified Grief Recovery Specialist, a certified Traumatologist, and a board certified Crisis Chaplain. I don’t believe my teachers at GMC would have thought this of me, but I had the foundation there to begin and I am eternally thankful to those who contributed to my effort.” What an amazing testament to the dedication of his servant’s heart and the power in a GMC education, lighting a fire in a young cadet’s heart to serve his country and local community.

“I don’t know if I could name one [teacher] without doing a disservice to others who were equally good in their disciplines.  I was a special student since I had completed my military obligation, so I was allowed to come on campus to take classes with the cadets and not wear a uniform. Being older, and more mature in life, with other career and life experience, professors likely did not have the same perception of me as a uniformed cadet. I recall Major Marvin, Dean, COL John Anderson, Ms. Mary Hunt Stembridge, COL Lee Almy and Major Bob Wiley as particularly helpful to special students and Major Grady Torrance was an inspiration to all of us.”

Rev. Dr. Peavy shared what his current situation is now that he is retired from active employment. He is retired from the State of Georgia, West Central Georgia Regional State Hospital after 34 years of service. He held various positions as a Case Manager, Adult Educator, Special Education Teacher, and Director of Staff Development and Training. In addition to state employment, he was enlisted in the US Navy Reserve as a Hospital Corpsman. He served 25 years in the US Navy, US Army Reserve and Navy Reserve. He was attached to the Fleet Marine Force as a Field Medical Specialist/Combat Corpsman and retired as a Senior Chief Petty Officer having been the Chief-in Charge of a USNR Fleet Marine Force Medical unit in Macon, GA and the Command Senior Chief Petty Officer of Marine Air Wing Medical Unit at NAS Atlanta. After retirement from US Navy Reserve he became an Adjunct Faculty member at Troy University, Phenix City, AL campus and taught there for 17 years as a professor of Counseling, Psychology and Education. He then retired from that position, but continued his work as a volunteer in the US Coast Guard Auxiliary, where he has served for fifteen years. He has held office as Flotilla Commander, Vice Flotilla Commander, Division Service Officer of Public Affairs, and Flotilla Service Officer of Public Education and Public Affairs. He was activated in 2005 for Hurricane Katrina Relief as a FEMA employee and worked as a Chaplain in Waveland, MS. During this time, he felt a call to ministry and subsequently sought training and ordination in the Lutheran denomination. He is a Senior Chaplain in the International Fellowship of Chaplains and he has trained with the Assemblies of God Seminary in Emergency Fire Department Chaplains Training. He also completed Clinical Pastoral Education training at St. Francis Hospital in Columbus, GA.  He serves currently as a Ruling Elder in his local church, fills the pulpit when called upon, and volunteers with Columbus Hospice in their Veteran-to-Veteran Program where he ministers to the sick and dying and their families. 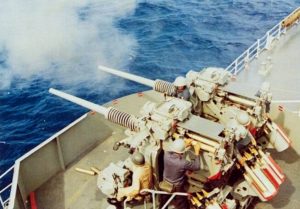 Reverend Dr. Peavy has accomplished many diverse services in his many careers, an enriching and fulfilling life. He also has made many strides on behalf of his local communities, by generously volunteering on various committees and agencies. For example, he chaired the Muscogee Adult Literacy Association for several years. More recently, he was appointed as Citizens Advisory Member of the Muscogee County Felony Drug Court and the Veterans Mental Health Court. Additionally, he serves in the US Coast Guard Auxiliary and provides boating safety and water safety classes in a variety of venues. Beyond these activities, he is an active member of the Retired Chief Petty Officer’s Mess in Columbus and offers bereavement services and military presence during funerals and times of loss. Nothing short of spectacular, he is also a member of local bluegrass groups where he plays “old time” banjo, mandola, tenor guitar and Dobro guitar for public entertainment. 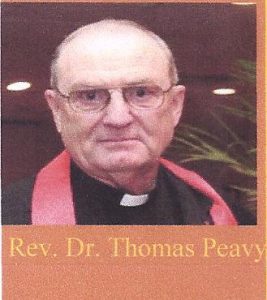 Impressed by his contributions to our country, I asked Reverend Dr. Peavy to share something about his love of teachers at Georgia Military College or to share a story about a GMC person or event who influenced his life. He shared, “When I returned form Navy service, I had taken the GED test in the Navy but had not taken the SAT or other course work. I was working as a full time firefighter at Central State Hospital and wanted to go to college. I made an appointment with Col. David Black and inquired about the possibility of junior college work. COL Black was a gracious man, and told me I could come to GMC as a junior college student on probation. He gave me three requirements I had to meet in order to remain in school and be accepted as a permanent student; 1) I had to take one academic course and pass that course 2) I had to take two remedial classes in math and language and pass those and 3) I had to take the SAT and pass it with a satisfactory score. I did as he asked and was accepted as a permanent student.  Later, I found out Col .Black had been a sailor in World War II, so I suspect he understood my plight returning from Vietnam service.”

Reflecting on his time at GMC Junior College, I asked him what was an awarding experience he could share with our alumni story readers. He stated, “I dropped out of high school at GMC in 1963 and would have graduated in 1964.  I went into the US Navy and never earned my high school diploma.  In 2014, I applied to GMC for awarding my diploma based on a Georgia code allowing members of the military to get their high school diploma if they left school and served in a time of war. I was granted my high school diploma 50 years after I left GMC and 45 years after I earned my associate degree there in 1970. It just seemed like the high school diploma would complete the academic circle.” He added if he could give one piece of advice to incoming freshmen, he would tell them to “always reach for the goal just beyond your grasp. When that mission is undertaken, personal growth and development will follow, and never, never, never, quit trying.”