Military Service Award: This is given to a GMC Corps of Cadets alumnus who has rendered unusual and conspicuous service, heroic effort, and action or service to their city, state, or nation while bringing honor to GMC and the Corps of Cadets. 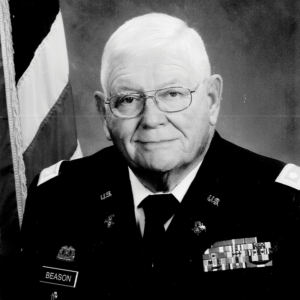 LTC (Ret.) Luther Beason represented America and Georgia Military College with honor and distinction throughout his entire military career, making him fully deserving of the GMC Military Service Award.  He faithfully served the United States Army in Mortuary Affairs. He commissioned with the U.S. Army Quartermaster Corps in the Graves Registration Service in 1968 (now called Mortuary Affairs.) LTC Beason is a veteran of both the Vietnam War and Operation Desert Storm, providing MOS (Military Occupational Specialty) expertise in an area that is seldom appreciated for the service it provides to military families. He served our country in insuring the return of the remains of deceased military personnel to the United States.

LTC Beason is a native of Edgefield, South Carolina, and a graduate of Strom Thurmond High School in 1963. After high school, he enrolled at GMC and graduated in 1967, and then attended The University of Georgia, where he graduated with his bachelor’s degree in 1969. LTC Beason credits GMC with “turning his life around” and helping him begin on a successful life path.

While on active duty, he was a Systems Engineer/Instructor and Burial Team Officer in the Memorial Activities Branch in Fort Lee, VA. From 1969-1970. He served in the Vietnam War, at OIC 483rd Field Services Co. Collection Points Long Binh Post and 3rd Brigade/9th Division Tan An RVN from January-April 1970. In addition, he worked at the OIC Central Identification Lab USA Mortuary Saigon RVN from May 1970-January 1971. From 1990-1991, he was Chief Joint Mortuary Affairs Officer at U.S. CENTCOM during Operation Desert Storm.

LTC Beason, while on reserve duty, served as Assistant Chief of Memorial Activities Branch in Fort Lee from 1973-1976, and was Chief from 1977-1980. During the years 1981-1990, he served as Logistics Officer in Mortuary Affairs at the Pentagon. From 1990-1996, LTC Beason was the Chief Joint Mortuary Affairs Officer at U.S. CENTCOM.

LTC Beason served as Deputy Coroner of Edgefield County, South Carolina from 1983-2018. He also served as First Vietnam Veteran Commander of American Legion Post 30, was the Edgefield County representative for the American Red Cross, and served in employee support with the National Guard and Reserves. He is a past president and Board of Directors member for the Greater Augusta UGA Bulldog Club, as well as for Pine Ridge Country Club.

LTC Beason has shown his gratitude for Georgia Military College by financially contributing to Baugh Barracks, the Old Capitol Guard Battalion Headquarters, and the NewDay USA Center for Leadership.