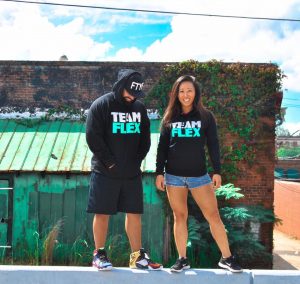 Lina Sealy uses her passion for healthy living to bring change to our local Milledgeville community. A Milledgeville native, Lina (Bark) Sealy grew up loving the local area, and she now uses her talents and interests to help improve our community. As the head trainer at Bodyplex Milledgeville, Lina trains and coaches over 200 members a week and is hoping to branch out into the world of online personal training. In the future, she will be assisting Bodyplex with their public relations and marketing efforts with the goal of reaching more people in Milledgeville.

“To be such a small town, we actually have a huge fitness focused population, but some people are low in the resources needed to pay for a gym membership or get training. Bodyplex hopes to start offering services to people who can’t get their fitness needs met,” shared Lina. Recently, with Lina’s knowledge and influence, the gym hosted their first ever 5K, held at Central State Hospital. The Get Milledgeville Moving Fun Run and 5K had over 200 participants. The race raised funds for local middle and high schools, including GMC Prep and John Milledge Academy, as well as made contributions to the GCSU Exercise Science program. The race will now be hosted twice a year, and it is the gym’s way of starting to share the importance of daily exercise and healthy eating to the community. The community that Lina is so quick to inspire recently voted her “Best of Milledgeville and Baldwin County’s Best Personal Trainer” for the Union Recorder’s Reader’s Choice Awards.

Anyone who knows Lina Sealy understands why she is so successful. Day in and day out, she can be found at the gym laughing with clients, encouraging others to reach their goals, and greeting everyone with a smile. She is full of life and has a huge heart along with a bubbly personality, but she can also get tough on her clients when needed. Through the gym’s online outreach, Lina hopes to reach people by offering a free “Couch to 5K” program prior to this fall’s Bodyplex 5K promotions. Other programs Lina is working on with the Bodyplex team include adding local activities like an annual charity golf tournament, fitness related events, and health outreach programs for children. Lina said, “This past year our trainers visited Creekside Elementary and held a Knockout Team Training session for the 5th graders. Childhood obesity is a growing problem in Milledgeville and we want to do our part to help fight it. We have more plans to visit schools to help with various PE, weightlifting classes, and future field trip visits to the gym.” Lina is proud to work in such a caring and health-focused community like Milledgeville and only hopes to spread the benefits of creating good lifestyle habits even more. 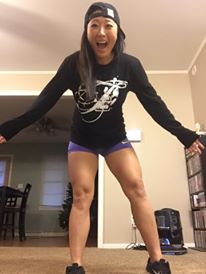 Lina also works for a local fitness apparel company, Flex Til You’re Famous, as their customer service and operations manager. The company is based out of Milledgeville and has goals to provide an online personal training program for the average person and a video library with individual work outs from Lina.

As a 7-year club member (a student who entered GMC in 6th grade and attended through 12th grade), Lina has fond memories of life at GMC, especially the physical activity aspect. “GMC gave us the opportunity to play sports when we probably wouldn’t have made the team at larger schools. We were such a small class, so I was given the chance to be on teams with track, basketball, and cheerleading. Being in PT gave us the endurance to be physical and meet those fitness standards.”

Lina attended GCSU after graduating from GMC, then for a time attended GMC Junior College, before going back again to GCSU. She soon realized she was unsure of what she wanted to major in and took a break from college, which led her into the fitness competition world. While working at Pickle Barrel, Lina decided to get back into a gym routine and lose the weight she had gained in her college years. Lina bonded over fitness with Amanda Adams, fellow gym rat, fitness model and competitor. Lina was inspired and motivated by Amanda, and went on to compete for several years. A trainer at Bodyplex encouraged Lina to get her personal training certification, which led to her impacting hundreds of locals, helping them meet their fitness goals. Lina left the competition industry after becoming unimpressed with industry standards, realizing that the fitness industry and health industry were completely different. She decided to leave the competition atmosphere and focused on her passion of teaching people about living healthy lifestyles and loving their bodies at a healthy weight.

GMC teachers that influenced her life and career were Colonel Alton, Sergeant Rutledge, and Ms. Shannon Davis. Lina said, “They were always encouraging and cared about our successes. They might have been tough, but I always knew they loved us.”  One of her favorite memories from GMC was during her senior year of high school, when GMC cadets were selected to hold the American flag during the National Anthem at the SEC Championship Game in 2006. . Lina proudly held her part of the flag on the 50 yard line in the middle of the Georgia Dome. Afterwards, GMC cadets were invited to watch the game between The University of Georgia and Louisiana State University.

As a student, Lina was described as kind, upbeat, and energetic. She had some great advice for incoming 6th graders: “Try everything. You might fail, but you might find something that you really love.” She also encouraged them to, “Keep in touch with your friends. GMC develops an atmosphere where students become family because of all the time spent together at school and extracurricular activities. I know I’m always there if any of my GMC friends need me because of the bond we shared. ”While growing up, Lina lived a typical Milledgeville childhood, spending summers out on the lake, laughing with friends at each other’s houses, and making the drive to the Macon mall.

Lina is now happily married to her husband, Alan, and they are the proud parents of Aiden, their 5-month old son. They are both devoted to a fit lifestyle and hope to inspire the local community.