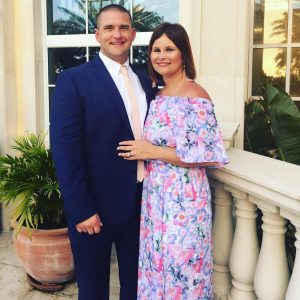 We are pleased to share with you the story of GMC alum Jodi Outler Sappe, (Prep School ‘97) and inspire you with how her beginnings at GMC impacted her life in incredible ways.

Jodi Outler Sappe grew up just outside of Milledgeville in Gordon, Georgia. As an incoming freshman at GMC, Jodi had only a little glimpse of what GMC was like from her cousin, Jennifer Chambers. Jodi had attended Wilkinson County public schools from kindergarten through 8thgrade, but as she started her high school career at GMC, the school eventually became her own. The uniform took some time to get used to and like many fathers of GMC daughters, her dad helped with the shoe shining at home. Jodi shared that she loved her time at GMC.  She loved the feel of the campus and the small class sizes.  At first, she was intimidated by formations, drills, and parades, but those experiences soon became a part of her own normal routine as a GMC student.

Jodi was very social in high school and served as a football manager, homecoming representative, and a contestant in the Miss GMC pageant. As an adult reflecting on her high school years, Jodi revealed some regrets. “I wish I had been more involved in school clubs and sports instead of dedicating so much time to my social life.  Back then I was afraid of failure, but now I am more afraid of not trying something than I am of failure.”  Jodi’s advice for incoming freshmen: “Soak it all up, don’t wish for the next season of your life, and just enjoy your current season.  Time passes quickly so enjoy every minute and don’t be afraid to try new things.”

Jodi credits her favorite teachers for influencing her life for the better. Colonel John Alton and Sergeant Ronald Crawford both seemed hard on the outside, but Jodi knew they really cared about her and her classmates. She mentioned retired GMC principal Colonel John Thornton (who she lovingly called “Coach Thornton”) and how she enjoyed his sense of humor and appreciated how he made learning fun. Jodi still pauses whenever she wants to write the word “very” due to her English teacher, Mrs. Nancy Kennedy’s strict rule to avoid that word when writing a paper. Topping Jodi’s list of favorite teachers was Ms. Nan Rogers, her government teacher who she grew to love and revere. As Jodi grew in friendship with Ms. Roger’s daughter Melissa, Ms. Rogers became a second mother to Jodi and her friends as well. 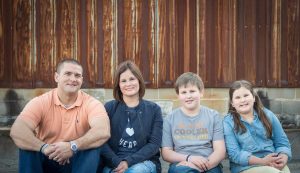 GMC’s small class sizes made the student body feel like a family, and the discipline that GMC instilled helped Jodi learn that there were always consequences for her decisions.  In high school, that may have been demerits or bull ring, but as she grew older, Jodi learned that the consequences in life grew as well.  Jodi now teaches those same values to her two children, Lawson and Bella.  Jodi credits GMC for those important life principles and credits many of her teachers for being great role models.

After the class of ‘97 enjoyed a senior class cruise to the Bahamas, they all went their separate ways to different colleges and universities, with Jodi choosing to attend Valdosta State University. Jodi completed her degree at American InterContinental University in Buckhead and after graduating with a degree in Business Administration, she began a career in banking.  She was a branch manager and loan officer at a local bank in Macon and that eventually led to a local businessman offering her a management position at his company, National Reimbursement Group where she later became the Chief Operating Officer.  Jodi thought she was set and would probably retire somewhere in the business sector, but she realized as life went on that God had much different plans for her family. She can now see how everything has worked together for her good and God’s glory. “Each position I’ve held and every trial I’ve faced has helped prepare me for the role I’m in now.” 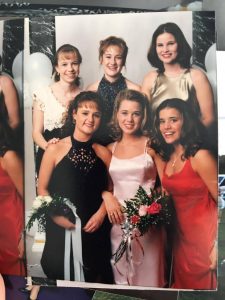 Jodi’s husband of 15 years, Brad, was a junior at Georgia College and State University when he tragically lost his father in a Milledgeville fire on March 13, 2000.  Brad left school to obtain a state HVAC license and help his family continue to run their third-generation heating and air business in Gordon, GA.  A couple of years later, Brad experienced an injury that required surgery and pain medication. While dealing with his injury as well as unresolved grief from losing his Dad, Brad found himself go down the path of full-blown addiction.

After years of battling that addiction, things really fell apart in 2013, and Brad and his family decided that Brad should enter a long-term treatment facility called No Longer Bound (NLB). NLB is a twelve-month, faith-based recovery program in Cumming, Ga.  Brad successfully completed that program and has found lasting freedom from his addiction.  Brad and Jodi say that No Longer Bound is the vessel that God used to save their family.  When Brad came home, he soon realized he was being called to start a program like No Longer Bound here in Central Georgia.  Brad went back to school and finished his undergrad degree at Mercer University and he and Jodi began the work of starting their ministry.

Together they founded Cross Roads Recovery Ministries based in Macon, Georgia. “There is not a program like Cross Roads offered in Central Georgia.  We help men find freedom from the bondage of drugs and alcohol and any other addiction by dealing with the heart issue.  Drinking and drugging is just a symptom of a bigger problem so by dealing with the root of the problem, men can find real freedom.  We help our residents work through their issues, help them find jobs in the community, restore relationships with God and their family, and ultimately learn how to work it all out in the real world.” Brad and Jodi have a heart for these men and their families because they have been there.  Because of their experience with addiction, they have been called and equipped to teach, help, and encourage others who are traveling the same road.

Jodi said, “To rehabilitate is to return to a former state, and we obviously don’t want that for our residents. We want to regenerate them because to regenerate is to be made new. We want to help them deal with their past and regenerate them into who God created them to be. The same process is used at No Longer Bound and as a strategic partner of NLB, we have designed our program after their recovery model. We have access to their teachers and staff so that is a huge advantage to have the support and resources of a 30-year-old program when we are just starting out.” The combination of Brad’s compassion for men struggling with addiction and Jodi’s love for families impacted by their loved one’s choices are why they decided to form Cross Roads Recovery. 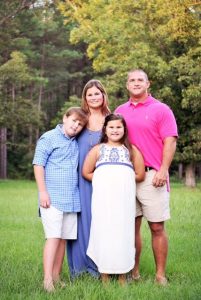 Brad and Jodi’s vision for Cross Roads is to eventually become a 12-month program accepting residents directly from detox.  They are currently running a 10-12 month transition program for men that have completed other recovery programs as they continue to raise funds, connect with people, and work on the next phase of ministry.  Eventually, they plan to run the day-one program, the transition program, and several in-house industries that supply residents with work as well as generate income to sustain the ministry.  Jodi and Brad feel that long term programs offer the best chance at lasting sobriety and can have a lasting impact on communities and families.  Their tag line is “If you save a man, you can save a family and make a generational impact.” Currently, Cross Roads has four in-house residents with many more men from the community joining in for weekly house meetings or one-on-one meetings with Brad.  Cross Roads also offers Family Recovery classes to families who have been impacted by addiction.

Although she wears various hats in the ministry, Jodi still finds time to visit Milledgeville and keep in touch with her friends from GMC.  Jodi’s senior class will be celebrating their twenty-year reunion this fall during Alumni Weekend.  Jodi shared how blessed she feels to still keep in touch with her five closest girlfriends from high school.  Although they live in different cities, they have been there for each other for weddings, babies, job changes, and the loss of loved ones.  She credits GMC for turning these classmates and friends into family.  Jodi says people can still find her every now and then enjoying a meal at The Brick or a smiley face cookie from Ryals’ Bakery.  With a grin, she said, “A smiley face cookie from Ryals’ has always made a bad day better.”

Jodi and Brad currently reside in Macon, Georgia and are the proud parents of Lawson, 11 and Bella, 8.  For more information on Cross Rods Recovery, please visit www.crossroadsrecovery.org, contact them on social media or via email at jssappe@gmail.com or bradsappe@crossroadrecovery.com