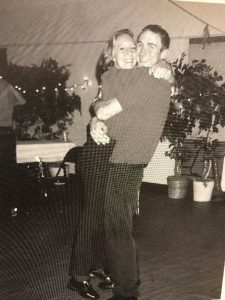 Jim and Melinda Rousseau met at GMC while in high school and since graduating from Georgia Military College, have gone on to serve our country as a military family. Jim Rousseau serves in the armed forces as a Green Beret, where he is an engineer for his small Special Forces team. Jim also serves as a part of a Free Fall team, involving jumping out of airplanes with a rucksack, gun, helmet, night vision, and oxygen mask (roughly 360 pounds) strapped to him at 25,000 feet. With almost all the airborne qualifications under his belt for free fall, he’s performed over 250 jumps. Throughout Jim’s many years of service to his country, Melinda was making sure their home life was stable and comforting for him to return to after his deployments.

After serving for 15 years, the Rousseau family returned to Milledgeville this past January after Jim accepted an assignment teaching students at GMC. Jim was a 7-year club member, while Melinda joined the ranks of the GMC 2003 class in her 10th grade year. Two months after graduating from GMC, Jim enlisted in the Army and began basic training, and then went onto airborne school. Following this, Jim moved to Fort Bragg, NC to attend Special Forces Assessment and Selection and the Special Forces qualification course, around two years of training. By the time Jim and Melinda were married, Jim knew he would be stationed in Ft. Lewis, Washington but had six months of language school to complete before heading to Ft. Lewis. While he completed language school, specializing in Tagalog, they enjoyed six months of newlywed life with the support of their Georgia family and friends. Once they moved to Washington, leaving right after Christmas in 2004, Melinda earned her cosmetology license, ran the household, and stayed home raising her two sons, supporting her family through eleven deployments. 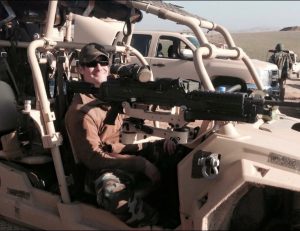 Immediately after moving to Washington, Jim was deployed in March of 2005 to Korea, then to Thailand for 4 months that summer, and following that deployment, was sent to Iraq in January 2006- a total of three deployments in a 12-month period. At the time of the Iraq deployment, Melinda was three months pregnant. She shared, “His first deployment was the hardest because I didn’t know a lot of people, but I met a lot of friends at cosmetology school and met more people at church. There are team wives who helped me a lot by getting together and supporting each other during deployments.” During the Iraq deployment, Melinda moved home to Milledgeville for two months until Jim came home for the birth of their first son. Joseph Rousseau was born August 25, 2006. Upon returning from such a stressful deployment, they were given down time to recover and relax as a family. Jim attended Free Fall School and then began his first Philippines deployment in February of 2007.

Melinda was pregnant with their second son, Jacob, in 2008, while Jim worked with Japanese Special Operations in New Mexico. During that time they found out their second son had a small left ventricle on his heart, which kept Melinda busy with doctor’s visits. On December 31st he was born, and on January 2nd Jacob underwent heart surgery. Jacob Rousseau is now a healthy 8-year old boy whose parents debate over whether to let him play football or not, much to his mother’s dismay. 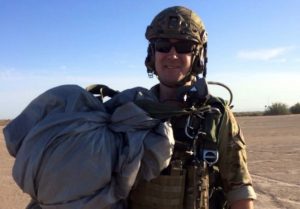 When Jim received orders to Ft. Bragg in 2009, Jim and Melinda moved there to train for three years non-deployable. While Jim trained new Special Forces recruits, Melinda worked at the local gym and raised her two sons. In the summer of 2012, they moved back to Washington, a state they both grew to adore. He was then immediately deployed to the Philippines for eight months, back to the exact same camp from his time in the Philippines in 2007. He went on to serve in Japan, Iraq, Korea, and Afghanistan for the next three years.

While in Afghanistan in 2016, Jim received a list of various assignments he could request. A ROTC position at GMC was on the list with a quick report date. The group happily gave him the slot and Jim left Afghanistan in November, packed up everything, mailed things back to Washington, found a family to rent their house, and headed home to Milledgeville, Georgia. “We never ever thought we could work here and that things would work out like this,” Melinda and Jim shared. Jim now teaches GMC freshman cadets who are taking military science junior level classes. At the end of two years they are commissioned as officers in the U.S. Army. While Jim teaches GMC students, he is also completing college classes at the University of Louisville.

When reminiscing on their time at GMC, Melinda shared, “We met at GMC, Jim was my platoon leader when I was a 10th grader and he was an 11th grader. Sergeant Crawford invited me and a friend over when we were walking by the range one day and asked me to shoot. I really liked it and joined the team. Jim was the captain of the rifle team so he taught me a lot, and that’s when we started dating.” They laughed as they shared their love of going to Battalion Ball together and how they are still going to balls as a married couple in the Army.

Jim and Melinda both praised Sergeant Crawford for the influence he had over their lives. Melinda shared, “he always called me ‘sweet pea.’” Jim added, “He was down to earth, told you how it was, and treated us like adults. He wouldn’t sugar coat it.” They also mentioned Col. Alton, Nancy Kennedy, and Ann Bertoli calling them “the bedrock” of GMC. And they also enjoy seeing Kim Leben, Pam Grant, and Shannon Davis around campus. Jim shared with us, “I enjoyed going to school here every day. The atmosphere and the environment was awesome. I never dreaded going to school. Everything has changed so much on campus, it’s all shiny and new. I wish I had tried harder, applied myself more, appreciated what a unique opportunity it was to go here, but I also had a lot of fun. GMC built interpersonal skills within me as a student, when you have to approach a senior over platoon issues or discipline someone below you. It taught me a lot about life in the real world.” Melinda added, “Going to GMC made me have a bigger appreciation for our country, learning about all the military aspects prepared me for life as an Army wife.” 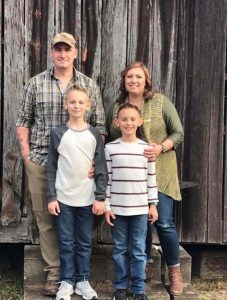 Jim and Melinda currently reside in Milledgeville, Georgia and are the proud parents of two sons, Joseph and Jacob. Their oldest, Joseph, is following in his father’s footsteps, as he started at GMC as a 6th grader this past August.