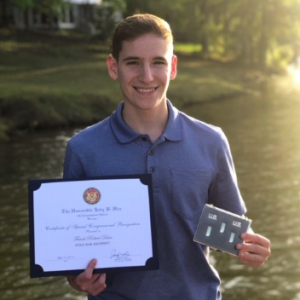 Cadet Frank Davis always aspired to be in the military. As a child, he would wear nothing but camouflage and developed a love for military history and memorabilia. It was something he was innately interested in as long as he can remember.

As he grew up in Long Valley, New Jersey, Cadet Davis saw two of his cousins explore their military options. “My cousin Lindsey went to West Point and graduated as a First Captain in 2014. During her commissioning ceremony, I was able to see the pride and importance of what she did. I always knew I wanted to be in the military, but at that point I decided I wanted to be an officer. Andy, Lindsey’s brother, attended Seton Hall and was in the ROTC program. He recently deployed to Afghanistan as an Infantry Officer,” shared Cadet Davis.

While being in the military was always a dream for Davis, his pathway to GMC was not so clear cut. He originally applied for the Four- Year ROTC National Merit Scholarship and intended to attend George Mason University in Virginia. However, right before that happened, he received an email about the Early Commissioning Program (ECP) and the Ike Skelton scholarship. “I started investigating the five different military junior colleges and I found that GMC was the perfect fit for me. I had no intention of coming to GMC at first, but I am really glad I ended up here and am very thankful for everything that happened.” 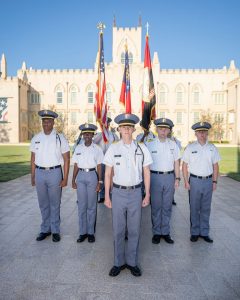 The morning after graduating high school, Davis left his hometown of Long Valley to start his new life as a Cadet at Georgia Military College. “I got to mini-camp a day later than everyone… Everyone already knew each other and kind of had a flavor for what GMC was, so I was kind of petrified coming to GMC! I didn’t know what was going on. However, everyone was very nice, and the instructors were awesome at getting me up to speed. By the end of the week, I was on a bus to Fort Knox, Kentucky.”

During his first year as a cadet, Davis competed in Ranger Challenge, a ROTC team that competes against other military colleges, and he quickly learned that challenges in life are often what bind people together the most. “We went to Fort Knox for a series of events such as shooting, land navigation, and ruck marching. The first day of the challenge we had to get started at Zero Dark Thirty, packing our 55-pound rucks and mentally preparing for the 20 mile march ahead.” While competing in the challenge, the temperature slowly dropped all day into the 30’s, and pouring rain ensued.  “After the competition, those individuals on my ranger challenge team are now the people who I’ve become best friends with at GMC. That set me up for the rest of my time here. The experience was so hard but it really bonded us.”

Throughout his two years at GMC, Davis has immersed himself in the Cadet Corps experience. While pursuing his associate degree in Criminal Justice, he has been a member of the Rifle Team, the Varsity Cross Country Team, and Ranger Team. Davis also served as Company Commander for Plebe Company at the end of last year, and received the Superior Cadet Decoration Award as well.

One of the biggest highlights for Cadet Davis was becoming Regimental Commander for the 140th Corps of Cadets. “Having that sword handed to me by LTG Caldwell and recognizing the responsibility that comes with it was very momentous. I knew it would be a big year,” shared Davis.

“Besides becoming Regimental Commander, many small moments between my fellow Cadets and I have meant the most to me during my time at GMC.” He mentioned how impactful it was when people came up and asked for mentorship, or when they thanked him for his efforts as Regimental Commander to create a positive environment that has benefited them. “Those small moments with my fellow cadets are more significant to me than an award. The opportunity to help others was a big reason why I wanted to be Regimental Commander in the first place: to create a positive environment that will inspire more people to come to GMC as well,” noted Davis.

Davis stated that GMC has helped him evolve into a more confident leader. “Coming out of high school I was on the quiet, more introverted side. Now, I enjoy public speaking and meeting new people in general. I understand how to create cohesive teams and how to work well with other people.” Through his time at GMC, Davis has experienced firsthand the benefit of taking advantage of all the Cadet Corps has to offer its students. “I would tell a prospective Cadet to take the hard route, don’t take the easy way out. Push yourself academically and physically. GMC offers so many amazing opportunities.”

After graduation, Cadet Davis is headed to Norwich University, where he will pursue a bachelor’s degree in Criminal Justice on a full scholarship. Davis says that GMC has helped him understand that he can have a military career and then also go into the civilian sector later in life. “I am still figuring out exactly what my future looks like, but I know I want to be a part of the Infantry for a while. I know I want to be on the front lines of the military leading other men and women.

Gratefulness exudes from Cadet Davis when he talks about his Corps experience, noting that GMC’s focus on character development has helped him become a better person. Davis’ one word for describing what GMC means to him is a powerful one: integrity.

“Integrity is that fundamental thing that character is based off. Integrity is required for trust, and with trust creates unified teams. Integrity is also believing in yourself; it is that factor which pushes you to always do the right thing, and what motivates you to complete hard tasks. GMC builds integrity and is building leaders for tomorrow.”