The Emerging Young Alumni Leader Award is given to an alumnus of GMC who has graduated within the past 10 years, is no more than 35 years of age, and has accomplished one or more of the following: Has demonstrated continuous support of the Alumni Association and GMC through contributions of time and/or gifts, has made outstanding contributions to a chosen profession, has achieved in such a way that has brought great honor to the individual and the College, has demonstrated service and a commitment to the community, and has fostered the ideals, goals and values of GMC 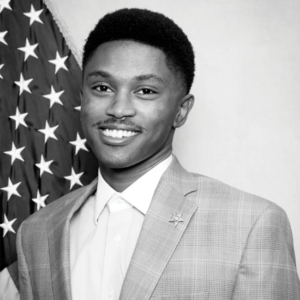 Gregory Dexter Countryman Jr. is a true emerging leader in the law enforcement community. He was born in Columbus, Georgia and received his associate’s degree in sociology from Georgia Military College-Columbus in 2020. Deputy Countryman is honored to be one of many proud graduates of Georgia Military College. He chose to attend GMC because his father is also a proud graduate of Georgia Military College as well as a former Adjunct Professor. Deputy Countryman is currently serving as a Deputy Sheriff with the Muscogee County Sheriff’s Office, where he is assigned to a task force that monitors over 700 registered sex offenders. As a newly appointed Deputy Marshall – which is a major achievement in itself – he puts the lives of other first. He takes great pride in keeping the community he serves safe.

Gregory was recently recognized by Piedmont Hospital and was selected as their monthly law enforcement hero. He saved the lives of three-year-old twins from drowning. Deputy Countryman also received a Letter of Commendation from the Sheriff of Muscogee County for this selfless act.  For the last two years, he has worked with local youth through the Muscogee County Sheriff’s Office Outreach Program, serving as a role model in a very troubled and at-risk environment.

He is no doubt an emerging leader in the law enforcement community and is an inspiration to his peers and this community.