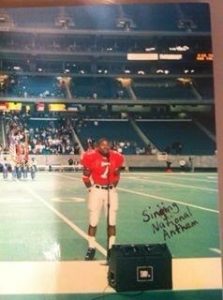 Earl B. Hunter, Jr. is a native of Columbia, South Carolina. He was raised in the Hollywood Hills neighborhood, where, according to him, most of the kids do not make it out. He describes a childhood being raised by a single parent, government assistance living and a rarely seen or known father. While growing up in an area where most people did not have the encouragement to leave, Earl set out to do just that, leave and become a success. “GMC saved my life.” Hunter speaks with humble gratitude about the college that he credits with giving him several of the components that indeed may have saved his life. As a successful high school football player, Hunter received several athletic scholarship offers from various colleges and universities. However, his grades and test scores prevented him from accepting scholarship offers from traditional four year institutions. GMC was the closest junior college with a football program that would take him. Hunter says, “It was a place where all of us football players were there for the same reasons. We couldn’t lie to ourselves, we couldn’t lie to each other, and we couldn’t lie to the world. Everybody knew why we were at GMC.”

According to Mr. Hunter, after growing up in a predominantly black community, GMC was a place that introduced him to diversity and how to work with people from various backgrounds. When he first arrived on campus, he thought GMC was a prison with no gates because of the strict rules. He watched a lot of his friends not take advantage of the program and what GMC had to offer. Mr. Hunter stated that it hurts him to see some of the former cadets who did not graduate because he knows that many regret their decision not to finish.  Their decision not to finish still resonates with him because he knows the things GMC has asked of its students are similar to life’s lessons. 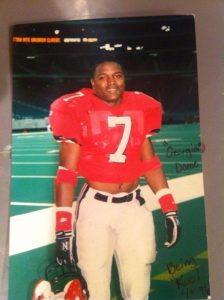 Earl B. Hunter, Jr. credits several people with having an influence on him during his time at Georgia Military College. Hunter says, “Sergeant Major Calvin Hill was hard as hell on us. As an 18 and 19 year old student, I didn’t understand why he was so hard. Life is tough on you, he made our life almost unbearable during our time at GMC! Because of his toughness, I can get through anything in life.” Hunter praised GMC’s former head football coach, Robert Nunn, for being someone who believed in him when a lot of people didn’t. He also shared kind words about GMC’s athletic supporter, Terry Schubert, who gave Hunter and other football players the opportunity to work during the summer. Schubert was an example of quality character to Hunter who says he watched him build GMC’s athletic program “on his back by giving everything he had to the program.” Brenda Brown is one of the amazing women he mentioned who understood what student athletes were going through. Working at the bookstore was his first job on campus and Ms. Martha Silsby, who managed the bookstore at the time, treated him with respect and gave him lots of responsibility. Hunter said, “Little did she know that time with her inspired me to go out and drive the business.” 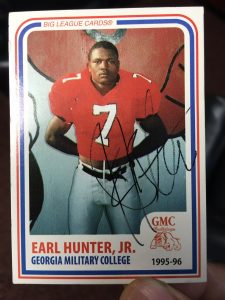 Although hesitant to go back in time and change anything about his experience at GMC. Hunter shared that he regretted not spending more time with former GMC President Major General Peter J. Boylan. Hunter remembers singing the National Anthem at the Georgia Dome while in uniform then quickly running out onto the field to play the game against Middle Georgia College. He was later praised by General Boylan for giving one of the best renditions of the National Anthem.

Upon graduating from Georgia Military College with an Associate’s Degree in General Studies, Hunter signed an athletic scholarship with Appalachian State University- Boone, North Carolina. He graduated from ASU with a double major in Communications and Political Science.  According to Hunter, while interviewing for jobs after graduating college; every employer noticed GMC on his resume and asked about his time there. Hunter said, “I perked up and enjoyed speaking about my experience.” He also said, “You can go to any college in the world, but to be able to go to a military college, and deal with the military school structure makes you into a different person. I’d tell any student who attends GMC to soak up the experience. Not a lot of people in the world can say they graduated from a military college, but my fellow alumni and I can.” 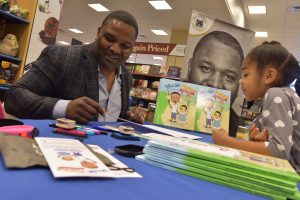 Hunter worked 12 years for Nokia Mobile Phones. During this time, Nokia was the number one mobile phone company in the world. He held varies positions including the Global and Domestic Sales Executive role. During his time at Nokia, Hunter was recruited to work for International Procurement Distribution where he served as Director of Sales and later was promoted to Vice President of Sales. Mr. Hunter is currently the Vice President for SylvanSport. After sharing his career successes with me, Hunter chuckled, “My GMC peers would have never thought I would be an executive of a company in the camping industry!”

Hunter also authored a children’s book, The Chronicles of Dillon and Fuzzy: The Bullying Edition, currently sold in Barnes and Noble, Amazon, and various online outlets. Never letting a moment go to waste, Hunter mentors youth and he’s on the board of Directors for The Transylvania County Boys and Girls Club in Brevard, NC. In addition, he travels the world as a motivational speaker to students and teachers, “My purpose in life is to give hope to the hopeless and the hopeful.” 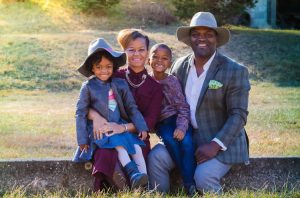 Mr. Hunter finished our interview by stating, “I get emotional talking about GMC because they took a chance on us when nobody else did, and GMC welcomed us, loved us, taught us culture, and mentally fed us. My professional motto is I will shove you, but I will hug you to get the best out of you and that’s what GMC did to us.”

Earl B. Hunter, Jr. and his wife Tamika of 10 years currently reside in North Carolina and are the proud parents of two children, Dillon and Gabriel who he affectionately calls “Fuzzy”. For more information on SylvanSport please visit www.sylvansport.com and to read more about Hunter’s children’s book visit: www.dillonandfuzzy.com