Georgia Military College is proud to be an institution with a rich 142-year history, steeped in tradition and honor.

COL Richard Moody (HS 1957, JC 1959) is one Alumnus whose family has played a significant part in that GMC history and is also a current part of its present and future as well.

COL Moody started at GMC in 1952 as an 8th grade student at GMC Grammar School in Jenkins Hall. During his years at GMC he was the Captain of the State Champion Drill Team, a  Company Commander and the Battle Group Adjutant. It was at GMC where he learned and began to appreciate the importance of military tradition and discipline. “Shining shoes and brass, wearing a clean starched uniform was my thing,” shared COL Moody. He notes his time at GMC was instrumental in teaching him to have integrity in all aspects of life. “One thing I learned at GMC is integrity. That is the most important thing in life.” 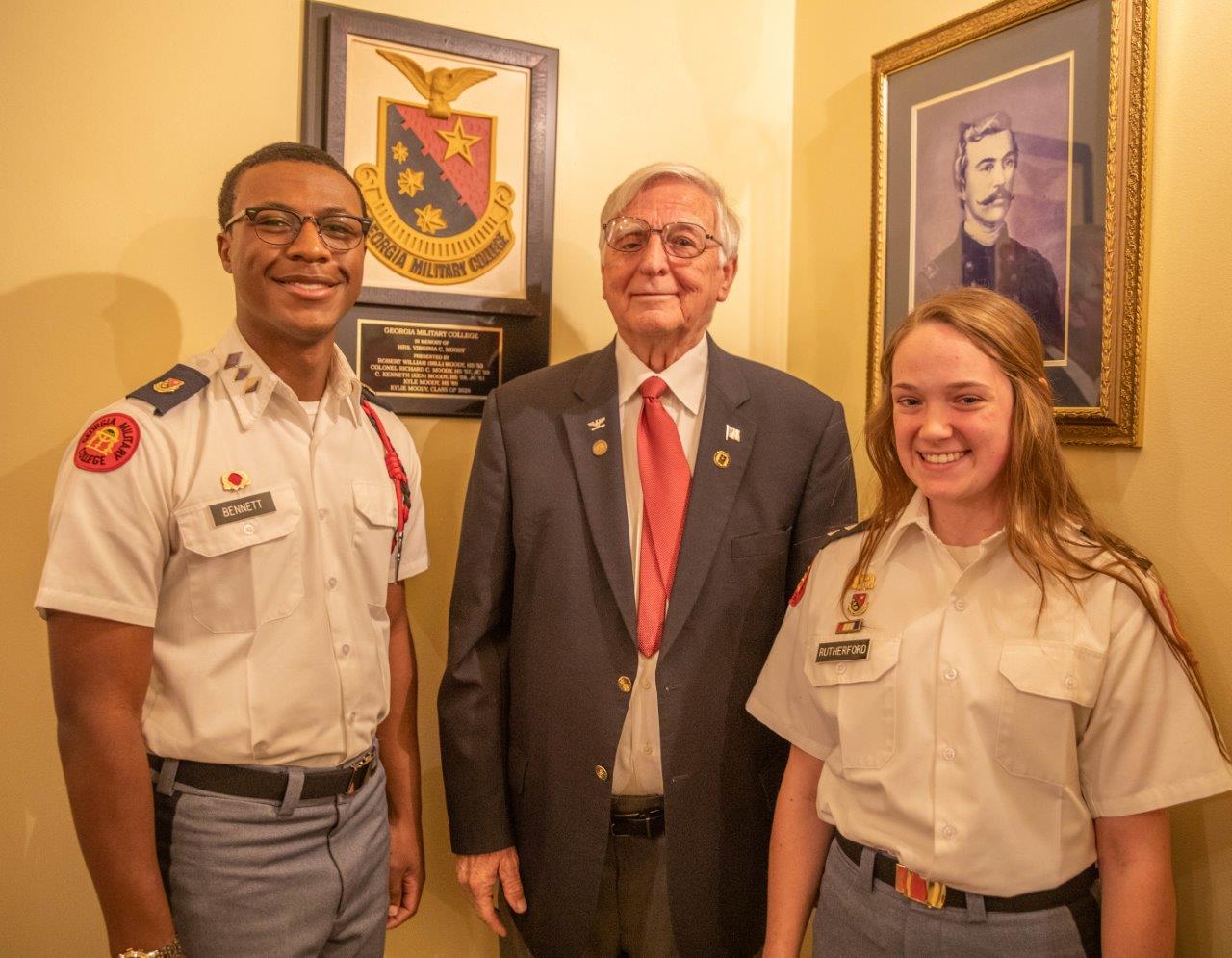 He knew from a young age he wanted to go into the military to pursue a full-time career. After his graduation from GMC, he enlisted in the Army.

“When I went into basic training, thanks to GMC, I was very prepared. I knew what I was doing and where I was going because of my time at Georgia Military College,” he noted when reflecting back on his early days in the military. As a result, he was names the “Outstanding Trainee” in his regiment.

While serving in the 82nd Airborne, he was accepted into Officer Candidate School and there he commissioned as a 2nd Lieutenant. He then served as a Field Artillery Officer, served in Germany, then branch transferred to Armor Division. He later returned to Germany in the 4th Armor Division, then branch transferred from Armor to Calvary. He also served in the 18th Airborne Corps for a year.  COL Moody served in Vietnam as a senior advisor to a Vietnamese Armor Calvary Unit as well. COL Moody served for a total of 33 years in the active Army and Reserves, and retired as Army Commandant of the Army Reserve School in Macon in 1993. He currently lives in Milledgeville and is a member of the Field Artillery Officer School Hall of Fame.

Richard’s family has played an important part in a unique GMC tradition – the GMC crest. “There was an old crest at GMC that we had in our history, but we decided it needed to be upgraded for the Cadets to wear. While they were in the process of designing the new crest and creating impressions, my mother, Mrs. Virginia Moody, used plaster of paris and helped create the rendering of the protype of the new crest. Soon after, the crest she helped to create was named the official GMC Crest and remains so today.  It is worn on the uniforms of every GMC Cadet from sixth grade through Junior College.

COL Moody’s family has a special GMC legacy spanning multiple generations. Richard’s brothers Robert William (Bill) HS 1952, Charles Kenneth (Ken) HS 1959, JC1961, and his son Kyle HS 1988, are all GMC alumni. His daughter-in-law, Lani, is the administrative assistant for the elementary school, and his granddaughter, Kylie, is a GMC Prep 6th grader. COL Moody had the incredible opportunity to play a key role in a GMC milestone with Kylie this year. She was recently pinned with one of the first GMC crests during the President’s Parade on November 5th  by her grandfather himself, the same crest her great-grandmother helped create many years ago. It was a special full-circle moment for not only the Moody family, but the GMC Family as well.  “I’m so proud that Kylie loves GMC and is experiencing similar traditions that I did when I was a cadet. Pinning the GMC crest on her is a special memory I will cherish”, COL Moody(Richard) shared.