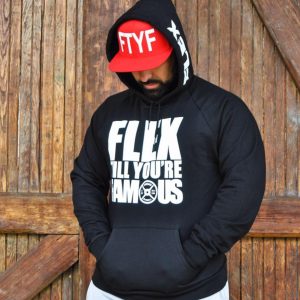 Chris Dixon, entrepreneur and owner of two successful businesses based in Milledgeville, Ga. is a graduate of Georgia Military College Junior College Class of 2009. Below he shares his story of working hard from a very young age to now being an entrepreneur and growing his businesses, Flex Till You’re Famous and Prepared by Flex Till You’re Famous.

Chris attended the original Midway Elementary School in Hardwick, Ga. He then attended Baldwin Middle School, at the time located across from Central City Park. The school was demolished in 2005 and is currently called Baldwin Park. He then graduated in 2001 from Baldwin High School. Chris is a true native of Milledgeville with a Hawaiian heritage, and dreams of his local businesses growing stronger and benefiting the community he loves.

Throughout high school, Chris played baseball, football, and was a Beta Club member as well. “I had perfect attendance in school because I didn’t want to go to work with my mom. If I could breathe, I could go to school or go to work. To this day, I’m the same way. I never ‘get sick’ because it was instilled in me to work hard. We were broke, and my mom was raising two boys as a single mom and owned her own cleaning service, Home Specialty. She never said no, no matter the time of day, we would clean houses at 9PM on a Friday. Watching my mom run her business taught me life lessons about how to be a business owner down the road. Her drive and seeing both the good and the bad sides of running a business showed me what I needed to get done to get my own company, Flex, off and running.” Chris recalls, “I remember working alongside a friend in our Prepared kitchen and he told me, ‘You were always falling asleep in first grade and I couldn’t figure out why you were tired!’ A lot of my friends didn’t realize I was working for my mom from 5 years old until I became an electrician.” 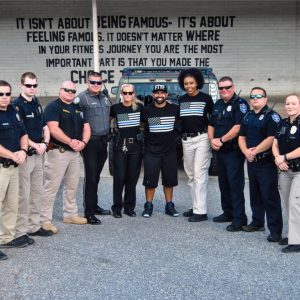 During Chris’ junior year of high school, he was chosen to train and intern as a commercial electrician. He accepted an internship with an electrician that had clients in 6 or 7 counties. After graduating high school, he began a career in the field, following in his father’s footsteps, who was also an electrician. At 21 years old, he was leading crews and saw what he referred to as “the ceiling” at Macon Power. Chris saw the limitations he would experience in this career and sought out a different career path.

Chris chose to leave Macon Power, and continued working for his mother’s cleaning company, Home Specialty. He loved the flexibility of GMC’s Junior College classes because he could attend a class in the morning, clean several houses during the day and then attend another evening class. Chris added, “The class schedules at GMC are amazing, not everybody enjoys waking up at 8 o clock in the morning, but my whole life I’ve been working hard to be successful. Getting up early and completing a class helped me on my way to getting my Associate Degree in Business. The teachers were always helpful. It was close to my home and the price was right. I went to school to learn and then get out of there. GMC’s motto at the time, ‘Start here, go anywhere’ was definitely my dream.” 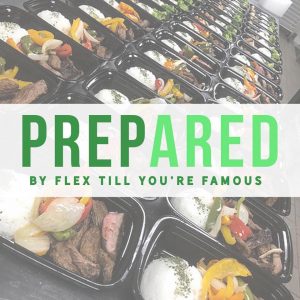 Being active and healthy has been a big passion for Chris. Badminton with Coach Harmon was one of Chris’ favorite classes at GMC, a sport that helped him unwind and have a good time while focusing on a healthy lifestyle. Chris and his girlfriend at the time, Codee Rainey, began their fitness journey together. Both were working tirelessly for Home Specialty throughout the day and working off the pounds and building up muscles at night. While working on their fitness goals, and working for his mother’s cleaning company, Codee and Chris received the news they would be expecting a baby boy. They named their son Cash. 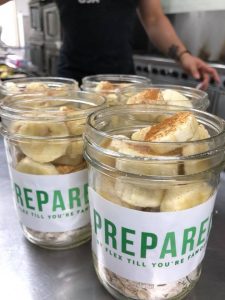 Cash would become the inspiration and the drive behind the clothing company Flex Till You’re Famous. Chris saw his bank account and realized he wasn’t making enough to raise a family. Created in June 2012 after Chris asked Codee to make him what he called “a gym shirt”, the company rapidly exploded into a very successful business. Chris shared the humble beginnings of his popular business, “Cash was just 5 months old. We were struggling. I was working 14-16hr days. We were on WIC and doing everything we could to stretch a dollar. I knew this would become something but we never knew what. I wanted something I could wear to the gym, I was feeling good about meeting my fitness goals and loved the name ‘Flex’. One day after going back and forth over the name Flex, Codee texted me and said, ‘what about Flex Till You’re Famous’ and that’s how the name of our company was born. We created the first shirt on Microsoft Paint. We bought an iron on transfer from Wal-Mart and we ironed it onto a green v-neck shirt. We had no intentions of selling it. Once I was wearing my shirt to the gym, I had a couple friends ask for one too, so we printed sixty shirts for our friends selling them for $15 each. We made sixty shirts disappear in two days. Now those friends who were wearing our shirts now had friends asking them where they could get one too. We created a Facebook page for the shirts thinking we might be onto something. We launched our website with orders from Milledgeville and then in our second week we had orders coming in from Canada. Being from a small town, we worked hard to figure out how to grow the business outside of our current location. Using social media, I reached out to fitness friends in other states and sent them shirts too.” 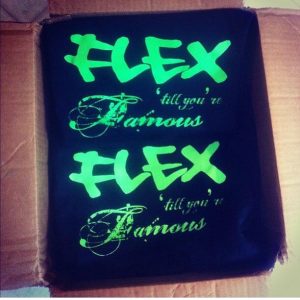 Once their company took off, their message became the most important part of their company. The words, “it’s not about being famous, it’s about feeling famous” became their motto. Below is a photo of the original t-shirt that started it all.

Chris recalls the Christmas that turned everything around, “Cash wasn’t old enough to realize we didn’t have any presents for him under the tree. I had $1.35 to my name, everything I worked for went to the raising of my son. If it weren’t for my parents and Codee’s parents, Cash wouldn’t have had a Christmas. We were dropping our first hoodie for a New Year’s release. We had orders start rolling in, with monthly releases coming in January, February, and March. We were using one car to get me to my cleaning job while Codee was trying to run orders up to the post office. We had to figure out how to meet the demand of the orders. Every month before a release we had no money in our account because we were putting it back into the business. We found an office location to rent month to month once we outgrew our kitchen.” After that Christmas release dropped, they knew they had struck gold. 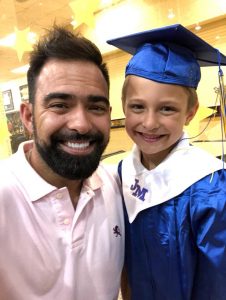 With a big heart for others, Chris was proud to share with me the many ways his company has been able to give back. In 2016 when the news broke of Dallas Police officers being gunned down, Chris knew he wanted to do something for the Dallas area. “I posted a Facebook status about how I felt to see these officers and their families suffering. There was so much controversy around the Back the Blue and Black Lives Matters movements, but we knew our company had to Back the Blue. We created an exclusive shirt and announced the news we would be donating the proceeds to the Dallas Fallen Officer Foundation. My goal was to raise $50,000, but we ended up a bit below that goal by donating $20,000. I’m still so proud of going from a company in the truck of my car at $350 to being able to hand that money off to the men and women who serve our country. I was not prepared for the amount of support we would receive. We had officers from London to California buying those shirts. I was also honored to attend the GMC First Responders football game, selling those same shirts, shooting them into the crowd, and seeing the National Anthem performer wearing our shirt.

In our Flex on Cancer fundraisers, we have also raised over $3,000 for Cayden, a little boy who fought and lost his battle to cancer a couple years ago. We’ve met some amazing people along the way. Giving back to our community whether it’s through cancer fundraisers or other foundations never gets old to me.” 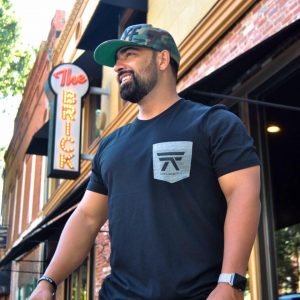 As Chris and Codee continued to co-parent their son, their relationship and the stress of running a successful time-consuming business took its toll on their relationship. They’ve since gone their separate ways, but continue to support each other in their dreams and ambitions. Codee is now a wife, mother of two, and owner of The Roost located in downtown Milledgeville. On April 14, 2018, Chris launched his second business, Prepared by Flex Till You’re Famous, a meal prep business for everyday people looking to eat healthier meals. They deliver meals to locations in Dublin, Athens, Milledgeville, and are currently based in an Atlanta kitchen. Chris is currently looking at locations in Milledgeville for a commercial grade kitchen space. This new space would make delivery more efficient in the middle Georgia area and beyond, with promises to have meal delivery straight to the doorsteps of Milledgeville consumers.

With meals like his bourbon salmon, garlic chicken, teriyaki steak, ground turkey, and shrimp fajita bowls, and specially prepared meals for those training with specific goals in mind, Prepared has something for everyone. Chris was inspired to create a meal prep delivery service after he saw the need for such a business in the Georgia area, as well as having firsthand experience having discipline in the kitchen, which has gained him more results than his time in the gym. Although he loves gym life and the people he’s met there, he sees the added benefits of healthy eating. Being his own guinea pig and eating meals from Prepared, Chris has lost 30 pounds in two months. “Teachers, realtors, just normal everyday people who want to eat better- that is who this company is for and those are the people who I want to help.” The company also recently debuted overnight oats in two different flavors as well. Chris is inspired by the feedback customers are giving him.

With multiple social media platforms, and in an age where successful companies contract out help to run their social media accounts, Chris is passionate about being the sole voice to his consumers online. He further explains, “The only person who can portray me and be as genuine with customers is me. I truly care about each story people have shared with me, so out of respect for them I’m the one commenting and replying to messages.” His goal is to ship outside of Georgia in six months and with the database of FTYF merchandise fans backing him, Chris is excited for the future of his evolving company.

Chris currently resides in Milledgeville and is a proud father to his son Cash, who attends John Milledge Academy. In his down time, he enjoys playing with his dogs, rooting for the Cleveland Cavaliers, and preparing for the ticket sales of Georgia football. You can support our fellow GMC alum by following along with Chris’ journey and businesses: