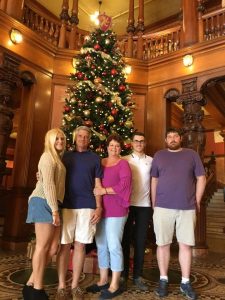 Blair Hall has accomplished many personal and professional goals since her graduation from Georgia Military College Prep School in 2012. Currently residing in St. Augustine, Florida, Blair serves local ice cream lovers by managing the Ben and Jerry’s newest downtown location, close to her alma mater Flagler College. After completing her degree, Blair trained for over a week at the Vermont company headquarters. The store location now joins 25 other locations in Florida serving Ben and Jerry’s ice cream.

She proudly works for a company that boasts, “Our social mission is actively recognizing the central role a business plays in a society by initiating innovative ways to improve the quality of life locally, nationally, and internationally.” Once a year, Ben and Jerry’s has a free cone day and the store matches those donations. This past year, her store alone donated over $2,000 to the local Boys and Girls Club.

Blair didn’t start her college life with ice cream dreams in mind; in fact, she was completing a Bachelor’s Degree in Religion with a minor in youth ministry, and then she was employed by Ben and Jerry’s. Blair, a 7-year club member (GMC Prep student who’s attended 6th through 12th grade), then went on to graduate from Flagler College in 2016 and three days after graduating she began working for the downtown location. She’s currently helping the store owners open up another location in Daytona, Florida and on track to become the distract manager for their team’s Florida locations. Blair will be traveling from St. Augustine to the Daytona location frequently to help get the store up and running. Blair appreciates the St. Augustine location because it reminds her of downtown Milledgeville.

Blair worked in youth ministry while in college and tried to get involved with local churches and communities as well. She stated, “I’m able to show my love of God through how I act at work. Workers and customers see the type of personality I have and I can show them God through those actions.” While in Milledgeville, she attended Sacred Heart Catholic Church.

Blair credits Major Harbor, the GMC band director during the 7 years she attended GMC, with inspiring her as a band student. She saw him put a lot of hard work into the band; His example in reaching out to students and connecting with them showed her a teacher’s influence on students. Blair also developed a close relationship with her English teacher, Amy Lee, who helped with the basketball cheerleading squad. She remembers Mrs. Lee being very encouraging and “taught me what it meant to respect my elders and adults around me.” She recalled a memory with her accelerated math teacher, Kathy Williams, who comforted the students after a drunk driving awareness seminar. “She talked to us and let us express our feelings and emotions. You could tell Mrs. Williams genuinely cared about us as people not just as her students.”

GMC Alums may remember Major Thomas Hall, Blair’s father, who worked as the GMC ROTC instructor beginning in 2007. While under the supervision of her father, Blair recalls a memory of repelling down the tower. She now finds this memory humorous, but back then it was no laughing matter. Blair shared, “My dad was the only one certified to train students on how to repel down the tower. During my junior year, I climbed the tower on a windy day. It was shaking and he was trying to calm me down, and with everybody watching me, I kept switching my words around from the nerves. I said the ‘shower is taking!’”

One activity Blair regrets not participating in during her time at GMC was competitive cheerleading. Under the instruction of Mrs. Stacie Stevenson in Jenkins Hall, Blair learned and loved the sport of gymnastics. She was in the band, ran cross country, played soccer, and loved cheerleading for the basketball team, but regrets not adding that one sport to her high school experience. Blair also performed in the high school productions of Oklahoma, Hairspray, Musical the Musical, and Thoroughly Modern Millie. Mark Weaver took her group to the Candlelight Processional at Disney World. “Not a lot of high schoolers get to have that experience. Mr. Weaver gave us an amazing memory with Neil Patrick Harris reading the script.”

Blair gushed about her time at GMC. She is a proud alum who credits so many of her accomplishments to the prep school. Her advice for incoming 6th graders is: “The military aspect is not all that scary. It can be a little intimidating at first, but everyone at GMC has their best interests for the students in their hearts.”

For those wanting to live the glory days of GMC pranks, Blair’s class was no different. She said, “When I was in 8th grade, we decided to do a prank. We put on big earrings, switched nametags, and wore colorful socks. We got in a bit of trouble, but we made a good memory.”

Blair said the highlight of her time at GMC was meeting her best friend, Amelia Lawson, in 10th grade. She is grateful to have met a lifelong friend and thanks GMC for making that connection. Outside of GMC, Blair was involved with her church’s youth group, Life Teen. Her senior year she helped lead the music, led camps, and attended Young Life. When reflecting on being a GMC cadet, she shared how unique an experience attending a military school was on her life after graduation. She shared, “Shouting out ‘Character Above All’ at each formation taught me to show my character. And I still don’t walk on the grass!”

Blair hasn’t visited Milledgeville in three years, but she misses The Brick, Ryals Bakery, and the downtown atmosphere. Blair cherishes this time living close to her family. Her mother works at Flagler College giving them the chance to meet often for lunch. They both have aspirations to help the local homeless community. The Hall family currently enjoys life in St. Augustine, Florida while Blair is pursuing her district managing career at Ben and Jerry’s.