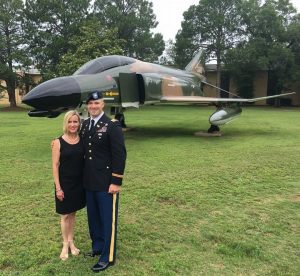 My family’s story with Georgia Military College began in 2003. My son MAJ James D. Walton (Jamie) became very interested in the possibility of a military career while in high school. We learned about Georgia Military College when a family friend mentioned the Early Commissioning Programs offered by the Army’s junior military colleges. Jamie was pretty excited, and since we have family roots in Georgia, he decided to apply to GMC.

We traveled from our home in Virginia Beach, Va. and went on a spring break visit to see the Milledgeville campus, where we met with then-PMS Major Tom Hall. On his visit to campus, Jamie said to me, “This feels like home” and the rest was history.

Jamie enrolled in the Early Commissioning Program as a Cadet at Georgia Military College.

The military leadership at GMC provided an environment in which my son could stretch himself in ways he may never have imagined. He respected his leaders and heeded their advice and guidance. He won several awards while at GMC, and was a cadet captain his second year. Another added benefit was that he learned how to keep a clean room…every mother’s dream! Being immersed in the GMC environment and spending time around successful and motivating leaders fed Jamie’s thirst for learning, growing, and challenging himself.

Jamie’s military tours have included time at Fort Leonard Wood, Mo., Fort Hood, Tx., Fort Benning, Ga., as well as time at the Joint Multinational Readiness Center in Hohenfels, Germany. He’s currently based at Schofield Barracks, HI. A sapper (combat engineer) to the core, he has served in several positions, including company Executive Officer and Commanding Officer, Assistant Brigade Planner, and Battalion Operations Officer. I am proud to share that in April of this year, Jamie will become Battalion Executive Officer!

Jamie promoted to major in 2016 and earned his master’s degree in 2017 from the Air Command and Staff College (ACSC) at Maxwell Air Force Base. He was the youngest officer of over 400 that year. He has deployed three times, and is a veteran of Operation Iraqi Freedom.

Jamie’s many commendations include the Bronze Star Medal, two Army Commendation Medals, and Combat Action Badge. His most important roles? Husband to the former Melissa Miller (a Georgia College graduate) for nearly 13 years and father of three daughters: Shelby (10), Piper (7), and June (2). Not bad at all for a beach kid who once had a heavy metal garage band and sported spiked hair and a pierced ear!

When asked why I support Georgia Military College financially, even 14 years after Jamie has graduated, my answer is simple, but profound. GMC turned my son into an officer and a gentleman! There is no greater reward as a parent than to see your child grow up to make a difference in the world. I am grateful for Georgia Military College and how Jamie’s experiences in the GMC Corps of Cadets helped transform him into the man he is today.

I know my gifts enable Georgia Military College to develop military leaders of the future, just like my son. When I think of one word to describe what GMC means to me, I think of “solid,” because the college and Corps leadership as well as GMC’s academic professionals have and continue to be top-notch, providing a well-rounded and strong educational and military experience for students. Plus, GMC has a solid history of producing successful graduates.

One of the most touching memories I have as a parent is receiving a very special email from then-commandant COL Pat Beer. In this email COL Beer wrote, “I would trust my life with your son. Even more, I would trust my son’s life with your son.” Those are words a mother will never forget. My son entered the Early Commissioning Program as a boy, but left Georgia Military College as a man, a leader, a patriot.