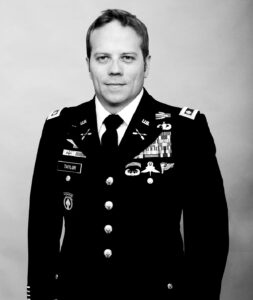 Military Service Award. This award is given to a GMC Corps of Cadets alumnus who has rendered unusual and conspicuous service, heroic effort and action or service to their city, state or nation while bringing honor to GMC and the Corps of Cadets.

MAJ Derick Taylor’s success while a member of the GMC JC Corps of Cadets was exemplary. He attended GMC with an ROTC scholarship from 1998-2000 and received his commission in 2000. Taylor’s GMC accomplishments are many. He served as Regimental Commander from 1999-2000, was President of the Student Honor Council and Student Government, was an editor of the student newspaper, was a member of the GMC Drill Team, and even served as announcer for GMC junior college football games.

He was the very first recipient of the Order of the Centurion medal, in addition to receiving the George C. Marshall Leadership Award, the Sinclair Milner Award at ROTC Advanced Camp in 1999, and the Superior Cadet Decoration Award in 2000.

He credits the strong foundation he received at GMC to giving him the best possible start in life. GMC offered him immense opportunities to participate, lead, and thrive as a member of the Corps of Cadets, and most importantly, learn how to work with people. Witnessing the strength created through camaraderie during his time at GMC was foundational in his understanding that people are the most important aspect of an organization. Above all, “Duty, Honor, Country” was the first of many codes MAJ Derick Taylor would subscribe to in his adult life and throughout his time as a Soldier. That noble higher purpose he learned and embraced at GMC has served him well throughout his military career.

Since commissioning in 2000, MAJ Taylor has embarked on an impressive 20+ year military career. He is still serving in the U.S. Army, as a MAJ / O-4, though he has had the unique opportunity to serve across all three components of the Army (USAR, ARNG, and RA). Over the course of almost 24 years, MAJ Taylor has served as an Infantryman, Human Resource Manager, and Special Forces Officer. He is currently deployed as the Deputy Operations Officer for a Counterterrorism Task Force in Qatar.
MAJ Taylor has deployed worldwide in support of National Defense and Counterterrorism activities to Afghanistan, United Arab Emirates, Kenya, Jordan, Turkey, Tunisia, Qatar, and Djibouti. He has also completed foreign assignments in Germany, South Korea, Jamaica, and Estonia.

In addition to serving his country, MAJ Taylor has prioritized volunteering with community service and outreach programs, going as far back as his introduction to community service at GMC with Habitat for Humanity, and continued efforts with the Wounded Warrior Foundation, Special Forces Foundation, and Green Beret Foundation. He is now a member of the Board for the Military Freefall Association. Each of these veteran-oriented non-profit organizations provides services and opportunities to warriors who have been injured, physically or mentally, during our nation’s conflicts. MAJ Taylor has also been a part-owner in various businesses, and he maintains professional instructional ratings with both the United States Parachutists Association and the International Body Flight Association.

MAJ Taylor has one son, Jonathan, who recently enlisted in the TXARNG as an Infantryman.