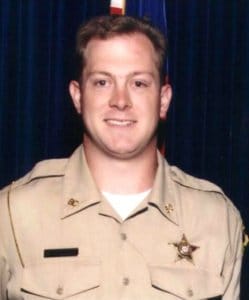 The Alumni Fallen Hero Recognition is given to an alumnus who as a First Responder rendered unusual and conspicuous service in an act of humanity, heroic effort/action in battle, or service to the city, state, or nation, going into harm’s way on behalf of others, and in doing so brought honor and distinction to GMC.

Even as a child, Will Robinson desired to dedicate his life to serving others. A spirited child full of life, he grew up in Milledgeville and attended GMC, a third generation cadet. Both of his grandfathers, six of his uncles, one of his aunts, his two brothers, and his father all attended Georgia Military College. While at GMC, Will filled his time outside of the classroom with activities and sports, especially football, where he was known as “Big Number 65!”
After graduating, as Will set out to accomplish his goals, it became evident that he wanted to serve his community. He went on to graduate from Georgia College and State University with a Bachelor’s degree in history, and was working on a Master’s in public administration. Taking to heart the values GMC instills in its students, Will moved forward in his life as an example of these values: Duty, Honor, and Country. It was important to him that he make a difference in the world around him.
Serving as deputy in the Baldwin County Sheriff’s Department was a dream come true for Deputy Robinson. He considered it an honor and privilege to help keep the community he loved safe, and this was a job where he felt he was able to serve people every day. He was a true servant leader, and this also went beyond the calling of his job. In April of 1995, after the Oklahoma City Bombing, Deputy Robinson, his friends, and fellow deputies traveled to Oklahoma to cook barbeque for the rescue workers at the bomb site. He understood the value of giving back and his life defined it.
On December 17, 1995, Deputy Robinson was tragically killed in the line of duty at the age of 26. His life’s purpose, to serve, lives on in the impact he made on his family, friends, and community. The evidence is in the many who come out every year to support the Will Robinson Memorial Run which benefits the GMC scholarship in his name and the C.H.A.M.P.S program of the Baldwin County Sheriff’s Department. It continues to be seen in the genuine smile and words of admiration that are a given at just the mention of his name. His status of hero is indefinite, as are the lasting effects of his immeasurable example of integrity, duty, and honor.
Deputy Robinson dedicated his life to serving others and in his 26 years, made a lasting impact on those who had the privilege of knowing him. His GMC family and his community are indebted to he and his family for his service and his sacrifice. His was a life that reflected true character and selflessness, and his legacy is one that will forever be honored.