Distinguished Alumnus Award: This is the highest honor given by the Alumni Association and recognizes an individual who has distinguished themselves in an outstanding manner and has brought honor to themselves and to GMC. It is presented for service to humanity and dedication that exemplifies the core values of “Duty, Honor, Country” and the regimental accolade of “Character Above All” in their personal and professional life. 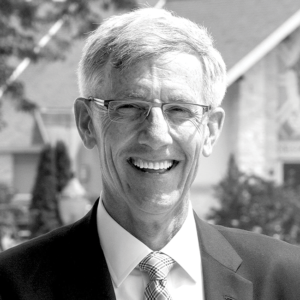 After completing an impressive Air Force career marked by duty and service to the nation, Dr. Tim Collins (JC 1978) has distinguished himself as a true leader and scholar in Catholic higher education as well.

Dr. Collins’ desire to do everything to the best of his ability and excel in leadership, academics, and service began at an impressive young age.  Dr. Collins graduated from Tucker High School at 16 and attended GMC JC from 1976-1978, where he credits GMC and the Army with helping him “grow up.” It was here at Georgia Military College where he learned foundational lessons in integrity and perseverance, ideals he has applied throughout his notable career. While a member of the Corps of Cadets, Dr. Collins met the love of his life, his wife Drenda, who also attended GMC JC from 1976-1977.  Dr. Collins earned a competitive two-year ROTC scholarship and served as Battalion XO, and graduated with distinction, earning an associate degree in Engineering from GMC.

He received appointments to multiple service academies, selecting to attend the U.S. Air Force Academy from 1978-1982. As the top Cadet in his class, Dr. Collins was chosen to serve as Cadet Wing Commander while at the Air Force Academy.  He credits this achievement to the exemplary education and military training he received as a GMC Junior College Cadet.

From 1982 to 1997, he served in a variety of staff and operational assignments gaining experience as a pilot and staff officer in the U.S. Air Force across Asia, Europe, and the United States. He served as commander for a ground combat unit that was fully integrated into one of the three elite U.S. Army Ranger battalions during Operations Desert Shield/Storm. Dr. Collins served as a U.S. Air Force Senior Officer from 1997-2005. Throughout this time, he served as commander in four of the five senior officer assignments. Dr. Collins was responsible for all aspects of mission success in peacetime, armistice, and in combat. He also served as commander for three combat units, responsible for all aspects of aircraft maintenance, flying operations, as well as people and resource management. In addition, he served as America’s senior military representative in the United Arab Emirates. He was promoted to Colonel in 1999 with only 15 years of service, becoming the youngest Colonel in the U.S. Air Force. He has more than 4,000 flying hours, including over 260 combat hours, as a command pilot in a variety of unmanned and manned fighter, tanker, reconnaissance, and command and control aircraft. He is a U.S. Air Force Command Pilot, a military parachutist, and is a credentialed Board President for both aviation Safety Investigation Boards and Accident Investigation Boards. Dr. Collins retired from the United States Air Force in 2005.

After retiring from the Air Force, Dr. Collins served as an executive leader at the Johns Hopkins University Applied Physics Laboratory in Maryland for 14 years. As the nation’s largest University Affiliated Research Center, the Laboratory performs research and development on behalf of the Department of Defense, the intelligence community, the National Aeronautics and Space Administration, and other federal agencies with more than 7,000 staff members who are making critical contributions to a wide variety of nationally and globally significant technical and scientific challenges. In 2014, Dr. Collins was chosen as the inaugural Chief Government Relations Officer, heading up activities across the $1.7B portfolio.

In 2019, he became the seventh President and Chief Executive Officer for Walsh University, a multi-national and multi-million-dollar Catholic higher education enterprise. Walsh University’s

mission is to build leaders in service to others, in the light of a values-based education in the Judeo-Christian tradition. The Board of Directors has extended Dr. Collins’ appointment as President through 2027. As a national guest lecturer and scholar on Catholic higher education, Dr. Collins has been involved in Catholic education for more than three decades.

Dr. Collins is involved in a variety of organizations such as the Air Force Association, Catholic Charities, Fellowship of Catholic Scholars, Knights of Columbus, and the United Services Organization (USO).

Dr. Collins and his wife of 40 years, Drenda, have a beautiful family made up of their three adult children, Jonathan, Maree, and Chet, and 14 grandchildren.