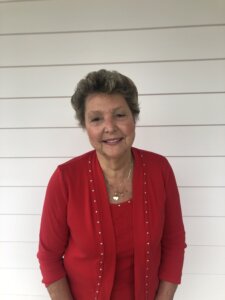 Honorary Alumna Award. This award is unique in that it is not given to an alumnus of GMC, but is given to an individual who has rendered exceptional and conspicuous service to GMC. This person is a model of integrity and stature and has demonstrated a continuing devotion to GMC and the values of the institution.

GMC is woven into the very fabric of the lives of Mrs. Smith and her family. She is the wife, sister, daughter-in-law, mother-in-law, and grandmother to GMC graduates, and most importantly, the mother of three GMC graduates. Her story began far from Milledgeville. She was born in the Netherlands and, because her father worked for a Dutch Shipping Company, she lived all over the world, including Hong Kong and England for boarding school. As a teenager, Karin met her husband, Nathaniel, while he was touring Europe with his family. They stayed in touch, and six years later, while she was in London for her senior year of nursing school, Nathanial came to visit. They later married and moved to his hometown of Milledgeville in 1964 where he taught at GMC and managed the family businesses.

Karin owns and operates Sew K Designs and is the heart that goes into the uniform fitting and customizing for GMC Prep and the Corps of Cadets. For over 30 years, Karin has been the primary tailor and custom embroiderer for GMC Uniforms and has also designed and produced other GMC specific clothing and items as well. This all began when as a GMC mom, she would do the alterations for her own sons. Her friends asked her to do the alterations for their children’s uniforms, and her business was born. In 1988, Karin officially opened Sew K Designs. At one point, she set up her machines in the GMC book store and worked from there. Her favorite part was getting to know the Cadets over the years. The impact she made on them is evident in the many who still stop by to say hello long after they have graduated. Karin also takes great pride in extending her services to the uniforms of the State Patrol as well as four deployed military units. It is the people she meets during the process that makes her work so meaningful.

Volunteer work is deeply important to Karin. Her dedication to her community is evident in the 20 years she diligently committed to the Civic Woman’s Club, of which she was President twice, Tenth District President, State Arts Department Chairman, and awarded the Georgia State Club Woman of the Year. Karin was President of the Town and Country Garden Club for two years. Karin is also a supporter of GMC Performing Arts and the expansion of the Prep School.

One of Karin’s favorite memories is a moment years ago when she looked up and noticed her husband and three sons walking down the sidewalk, unknowingly and naturally falling into cadence. GMC is a part of who they are, and this image embodies that. The values that GMC instills and that Karin values – respect, leadership, and self-confidence – are reflected in her children and grandchildren and every GMC cadet who walks through our gates.