The Georgia Military College Hall of Heroes pays tribute to an alumnus of the GMC Corps of Cadets who has demonstrated extraordinary service to our nation while bringing honor to Georgia Military College. This is the highest recognition for an alumnus of the Corps of Cadets, and on Friday, April 16, 2021, the first three members were inducted into the Hall of Heroes at GMC’s Military Honors Parade. 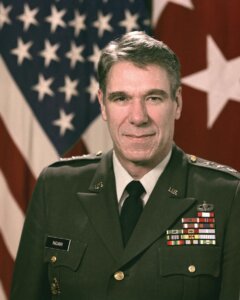 LTG Noah attended Georgia Military College elementary and high school and received his appointment to the United States Military Academy through GMC as an honor graduate in 1948. After graduating from the U.S. Military Academy in 1953, LTG Noah served a career Army Officer in the Corps of Engineers for 35 years. His military awards and decorations include two Distinguished Service Medals, two Legion of Merits, a Bronze Star, a Meritorious Service Medal and the Senior Parachutist Badge.

Post-retirement, LTG Noah’s efforts and leadership continued to be recognized by serving as honorary Colonel of the 307th Engineer Regiment and the receipt of the Gold Deflurry from the Army Engineer Association. In 2015, LTG Noah was appointed as a Distinguished Graduate of the United States Military Academy. To learn more about LTG Noah, please click here. 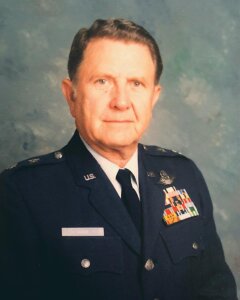 When he assumed the role of President, Major General Acker was able to increase state funding for the school, added sixth and seventh grades to the Prep school and added four new college campuses in Georgia. He also resurrected the College football team and implemented new technology in the classrooms. Diversity was an issue near and dear to Major General Acker’s heart. As President, he began providing scholarships to African American students to increase diversity. He grew African American student enrollments from three to 18 percent during his tenure. A lifelong commitment to providing equal opportunities to all people was a focus of his leadership. Through his dedication to GMC, the school developed a solid track record of sending young adults to four-year colleges, instilled with the strength of character and discipline that comes from a military school. Major General Acker also worked with the GMC Foundation to secure large land tracts from donations and purchases which would eventually be used for the construction of Baugh Barracks, athletic playing fields, Ruark Athletic Center, and more. To learn more about Major General Acker, please click here.

LTC Turner grew up and attended Georgia Military College, leaving in 1934 and to go onto the United States Military Academy. He went on to serve with the Calvary. LTC Turner with the 506th Parachute Infantry Regiment of the 101st Airborne Division was posthumously awarded the Distinguished Service Cross for “outstanding leadership, personal bravery and zealous devotion to duty at the cost of his life.”

At the Normandy American Cemetery and Memorial, there are over 170 acres of white crosses and Stars of David which mark the graves of American soldiers who gave their lives to liberate Europe during World War II. The cross at plot D, row 19, grave 21 bears the name LTC William L. Turner. His brother, Lt. Dennis T. Turner of the 28th Infantry Regiment, who was killed in France on July 12, 1944 is buried beside him. Other decorations he received include the Bronze Star Medal and the Purple Heart Medal. To learn more about LTC Turner, please click here.

We can never repay these gentlemen for their service, but we will forever be grateful and their legacies will always live on at
Georgia Military College.